The Creative Music Foundation is acting as the nonprofit ‘fiscal sponsor’ for CMS alumnus Sylvain Leroux’s project to teach music to children in Guinea, West Africa. CMF is taking tax-deductible donations for the ‘l’Ecole Fula Flute.’ Read Sylvain’s story of how he started the school and the progress it’s made.

Something very special has been happening in Guinea and l’Ecole Fula Flute has taken a life of its own.

Many of you supported and followed my Kickstarter campaign two years ago and subsequent adventures in Guinea last year, teaching children to read music and play flute. Your interest and concern was a source of comfort and I thank you from the bottom of my heart.

In June 2014 when I returned from those experiences the Kickstarter project was not finished, I had to deliver the promised rewards: many flutes, a new CD, and a documentary film.

Having worked on them in Guinea and other than for a few finishing touches, I had 60 beautiful flutes ready to go so that was not difficult. The CD required more work but I had good field recordings and, after a listen David Soldier agreed to release it on Mulatta Records. Great photos by my collaborator Bakou helping, by the end of the summer it was done. The movie was more difficult.

The plan had been that I was going to work on it in Guinea over the four months project but within a week of my arrival, the local electrical grid had irretrievably fried my computer. So, back in New York I went underground for a few months, concentrated and managed to emerge with a 62-minute film that, I felt, told an honest story called “Les Enfants de Tyabala” (the children of Tyabala). 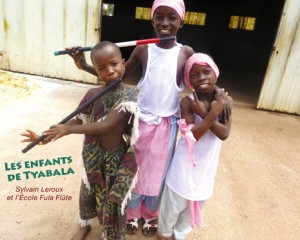 By early fall, after a summer of lobbying and in their kind wisdom, Judson Church, the beautiful legendary Greenwich Village activist house of worship, agreed to host the event I had envisioned: a combination concert / flute and photo exhibition / Les Enfants de Tyabala CD release / and Les Enfants de Tyabala film premiere. A date of November 20 was offered, press releases were issued to media, journalists, writers, and to my network.

The great day arrived and we had a very nice event. Generous volunteers helped set up and serve, the public filled the space, perused the photo and flute exhibits, listened to live music and watched the movie. After a lively discussion, we hung out and enjoyed some wine and cheese together.

It was a successful night, but not in an important way: I had not managed to reach a significant audience beyond my circle. The story was finished.

Many of us have had that experience, where you work feverishly, your heart full of hope to break through, capture the imagination of the public and open up a new world of possibilities, but then reality checks in and pops the bubble. After all this effort there was no opening. We had an interesting time but now it was over. How then to keep this project so full of promise going?

But magic often comes in modest guise and by the end of the night a generous person who was touched by the story offered the financing to provide a flute teacher for our students until I could get it together to return.

As a result, and for a year now, this gracious gift enabled the great Mamady Mansare, world-renowned Master of the Guinean flute and teacher, to instruct them in the traditional style and repertoire and I am happy to report that he is positively delighted with them. By all accounts they have been making great progress. They are talented and serious and Mamady is especially glad since he had previously lamented to me that he was worried about the future of his beloved instrument.

As you may remember, I modified the traditional Guinean flute, the tambin (a.k.a. Fula flute) and rendered it chromatic. Before my departure last year I had briefed our most advanced student in chromatic techniques in which he has reportedly made great strides, hopefully passing some of it on to the other ones.

Another wonderful development is that the Creative Music Foundation has accepted to sponsor l’Ecole Fula Flute and therefore your donations will be tax-deductible (CMF will deduct 5% of donations for administrative costs).

This December I will go back to Conakry to bring the students up to date and encourage them to open their hearts and minds and dive deeper into their studies. It would be really wonderful to bring good news in the form of material support from our more fortunate side of the world.

Therefore, I invite you to emulate our generous friend whose gift allowed for the near-miraculous advancement of our program and donate to l’Ecole Fula Flute. Your donations will be used to maximum effect for the welfare, advancement, and benefit of our students. A little goes a long way in Guinea, so even a small amount can have a big impact.