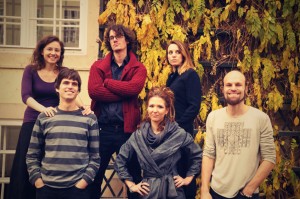 TOPOS KOLEKTIV is a project of six musicians based in Prague, Czech Republic, who concern themselves with site-specific eclectic improvisation.

They began their musico-dramatic performance at the pool table in the Firehouse Space. Lovely clicks and thuds of balls on the table and jittery accordion sounds accompanied a game-like theatrical look. The performers then moved in an orderly fashion into the main concert space to integrate the stationary instruments into the sound. The sequence of the work seemed triggered, with certain lengths, genres, and dynamic levels pre-planned . Especially because the performance ended up as it began, its structure seemed preset, with improvisation more a matter of detail.

When I improvise, I find such a plan a bit constricting, although it worked harmoniously for Topos Kolektiv. The singer’s beautiful and varied voice limited its expression, each time it appeared as a solo, to one idea: Loud, Quiet, Genre-specific, and so forth. This approach did shine at certain beautiful moments, for example, in the shakuhachi sounds of Marek Matvija and Steven Louis Cohn, who also improvised smooth, rapid dissonant piano riffs linked closely to the clean drumming of Tomáš Kerle. The harpist used mainly what are, by now, familiar additions to extended harp techniques, as well as tonal melodies with accompaniment figures.

The dancer awaited a certain fullness in the music before moving slowly to center stage. She chose various ensemble members in turn as her chief improvisation partner. I wished for brighter light, as I did when the audience needed to change locations. Light would not have harmed the ambience of the work and would have helped those of us with crummy vision.

These musicians improvise comfortably together and are united amidst the variation they produce. I welcome the spirit in which this was done, hoping that the next time I hear and see them that they will burst out in improvisation that is less decorous.