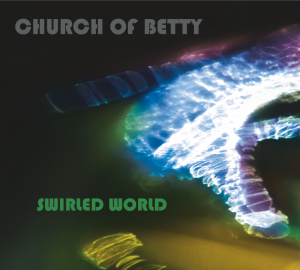 Brooklyn’s Church of Betty, the brainchild of sitarist / guitarist Chris Rael, was, from its beginning, an interesting anomaly. Being a sitar player myself, I was intrigued by his concept. COB first hit the scene in 1998. An impressive list of musicians who performed and recorded with COB includes tabla master and Rael’s longtime collaborator, Deep Singh. Their live performances brought theatrics and dance to their live sound. Rael’s sitar style, far from orthodox classical raga, nonetheless used raga as a framework he built on a pop / rock / folk / psychedelic foundation.

After an impressive 17 years, nine COB releases, several solo and collaboration releases, four films, and a book, Rael once again brings COB to the forefront with a new CD: Swirled World.

This release differs from many previous COB releases in the conspicuous absence of Singh. Apart from Rael’s sitar, there is nothing that can be defined as eastern in this music. It’s obvious that Rael’s musical world is firmly rooted in psychedelia and 60’s rock. The music relies heavily on its thick instrumentation (the string section dominates the music), very imaginative arrangements, insistent rock rhythms, and overall idealistic “neo-hippie-love-is-the-answer” vibe. There are few solos and no face-melting displays of chops here. This CD’s strength is in the songwriting and arranging. All the songs fit well with each other with no drastic contrasts, and the few contrasts that one hears serve to add flavor to an already colorful music. It all produces a feel-good vibe that doesn’t make a lot of intense demands on the listener.

Rael’s vocals fit with the music, and carry the vivid imagery of his lyrics quite well. His work on sitar, guitar, and bass remain in a solidly supportive role, subservient to the songs. Rael is first and foremost a singer-songwriter who has found a unique way of expressing his songs.

If psychedelic rock is your taste, you will find a veritable banquet in the Church of Betty.