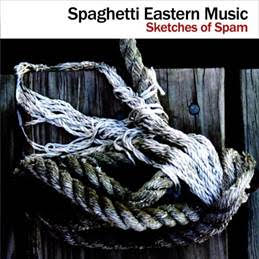 Every now and again, my friend Sohrab Saadat (editor / publisher of DBDBD) just loves to give me music that challenges my ability as a reviewer. He did it again with Spaghetti Eastern Music‘s new release Sketches of Spam, the solo project of New York based musician Sal Cataldi.

The music is not definable by genre because Cataldi clearly does not see things in terms of genre. He seems primarily concerned with using any musical device, any genre, any instrument, any abstract and ambient sound (including the sound of a telephone manipulated with pitch shifting) to make his statement. Genres identifiable and arcane dance in patterns impossible to predict. One listens and at first wonders where this is going. How will this work? Then, suddenly, it all makes sense once Cataldi puts it together. Caltadi’s alchemy never falters, never fails.

His electric guitar work focuses on making a lyrical and poetic statement, and while chops are evident, they always serve his own vision of the music. The keyboards, programming, percussions, and samples are manipulated to form a very colorful and detailed background upon which he carefully places every note. He obviously thinks like a producer.

Sketches of Spam makes a sharp division between his electric and acoustic compositions. The electric compositions are thickly orchestrated, with his guitar lines holding unchallenged dominion over the precisely controlled chaos under it. The acoustic tracks are another story altogether.

Nothing from the electric tracks prepares the listener for the sparse, stripped down minimalism of the acoustic offerings. Suddenly, he’s transformed from a mad techno-sorcerer conjuring visions of beauty and madness from beyond to a poetic singer / songwriter / storyteller. Most of the acoustic tracks are simple singing over a single acoustic guitar accompaniment. “Nap Dust” stands out as an overdubbed duet that shows Cataldi’s quite fascinating ideas of harmony and melodic moodscape (doubtless Django Reinhardt’s ghost is standing in the shadows, nodding with approval).

To put together such a collection is an act of bravery, and confident disregard for conventional ideas about genre (and marketing). To execute it with the taste, mastery, and beauty that Cataldi did with indisputable success is an impressive accomplishment.