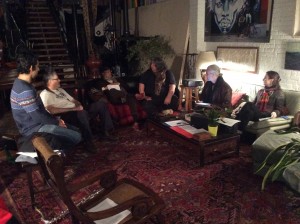 On Tuesday, 2/23/16, Musicians For Musicians (MFM) held its third open public meeting at CA Music Room. The attendance was a bit thin, but considering the miserable weather, this was no surprise.

After the ritualistic opening of the meeting with a musical offering (this time, it was MFM founder Sohrab Saadat’s solo saxophone exploration of his composition “Sad Sake”), the discourse and dialogue over the processes, possibilities, and definitions of MFM and its agenda began to take shape.

Legendary jazz musician and musician’s activist Jimmy Owens was once again in attendance. His sage presence brought a welcome sense of calm reflection to the proceedings. His input proved quite valuable.

Saadat mentioned that an indispensable part of this is for musicians to tell the public that they are professionals. This is, of course, the cornerstone of MFM as an ideologically motivated organization. Owens responded to this by saying that the quality of one’s performance is usually enough to prove their bona fides. The two diametrically opposed ideas brought some discussion into the open. I mentioned that it is incumbent upon musicians to demand proper remuneration for their work. I believe it has to begin as an individual act based upon the principle of getting paid. Or as Yusef Lateef once told me, “Always get your price.” It must start as a fundamental inner belief that our work has value. Without this personal / individual belief, a collective belief will be either incomplete and weak, or impossible. Saadat believes, quite passionately, that a public campaign to educate musicians will accomplish this. Personally, I don’t know if this will work one way or another. It must always be up to the individual first and foremost, and if propagating this idea in the collective zeitgeist is to be successful, it must already have its seed within the collective psyche. Otherwise, the results will be questionable at best. The sad fact is that some musicians lack the capacity for practicality in business matters, and always will. Saadat should be ready for this.

Another important point of discussion throughout the meeting was the ambiguity of the legal status of musicians (I.e. will they be categorized as employees, independent contractors, employers, etc.?). A great deal of detail was explored in this area, and sadly, the ambiguity was not nearly cleared up. One of the reasons for this was that the Musicians Union, IRS, NY State Dept. of Tax and Finance, Federal Government, State governments, etc. all have different definitions of the legal status of professional musicians. Add to this the multitude of different business models any given musician may find him/herself involved in, and you have a legal and financial knot that seems nearly impossible to untie. It may very well be that MFM will need to come up with an entirely new and unprecedented definition of the legal status of a musician, and work toward it’s acceptance. This will be no easy task, as musicians in general will always have their own ideas on how they are to be legally defined, and since the workings and environment of the music business is in a chaotic state of constant change, and the aforementioned multitude of business models in effect, there’s no way to pin down any one definition of how a musician functions as a legal / business entity.

Saadat devoted some time discussing why musicians need to organize. The overall concept of organization is beyond dispute. Power respects power, and few things denote power more effectively than strength in numbers. However, there are a number of problems be sorted out. These include, but are not limited to: 1. The method of organization. 2. The financial and political model the organization will use as a template. 3. The task of actually organizing an aggregate of musicians whose dissimilar markets and business models (as well as cultural or subcultural identities) place obstacles in the way of finding a “one size fits all” business model. Add to this the anomalies of the artistic mindset that lack the temperament and inclination for communal action, or the “Yo Cats” types (as lampooned in the Frank Zappa song of the same name) who are entirely mercenary in their musical endeavors, and you certainly have your work cut out for you.

The main point Saadat made was that all musicians come to a point where they need help. MFM is attempting to set up a collective where musicians can support each other. I quote Saadat: “Music is about sharing.”

Some brief discussion was devoted to membership benefits. One of the points was that MFM does not provide specific services or benefits, but provides a means for its acquisition. In other words, while MFM cannot address individual problems, it can address collective problems. An example: if someone wants health insurance, MFM cannot provide this. But they can provide a referral through the database that is being built that will be accessible only by members.

Saadat mentioned his approaching the 1% to support MFM (some people whose support he is cultivating includes Yo Yo Ma, David Byrne, Johnny Rotten, Bruce Springsteen, and Harry Belafonte). Owens asked what would be their motive for joining. Saadat responded “If they have a Heart!” This would assume an idealistic position on Saadat’s part, but who knows? It may work.

In the midst of the discussion about employee / worker vs. independent contractor, discussion of the tax exemption incident with the jazz clubs in NYC came up (some years ago, a deal was struck between the NY State Dept. of Taxation and Finance, and the jazz clubs in NYC. The clubs would be exempt from sales tax on admission price if they agreed to pay part of the savings into a pension fund administered by the Musicians Union. All the clubs agreed. But since the clubs were not legally obligated to pay into the union pension fund, despite agreeing to do so, the pension fund didn’t see a penny). This incident gave birth to the Justice for Jazz Artists offshoot of the Local 802 (which itself was precursor to MFM). This was no digression, as it stemmed from the relevant questions of paying musicians and defining their legal status.

Finally, Saadat presented some of the goals of MFM for the remainder of 2016. This includes a new business plan, setting up a fundraiser event (Saadat was looking at November/December), seeking grants, and holding workshops with MFM endorsers Arturo O’Farrell, Dave Liebman, and Mark Steiner.

The overall mood of the meeting was more open and receptive to ideas, despite the occasional outburst of impassioned debate over some point or another. It seemed that a lot was accomplished in this meeting, and a great deal of the difficulties that plague the beginnings of MFM are slowly being smoothed out. In this, as well as my review of the last MFM meeting, I played devil’s advocate, and sought out the shortcomings of this project from an objective perspective. I believe this is necessary, as MFM is not even close to being out of the woods, and a lot of difficult decisions and work lay ahead. And there are clearly alterations and modifications to the original ideas behind how MFM is to operate to be made. But the meeting seemed to prove, if nothing else, that the idea is moving ahead.

MFM’s Second Public Meeting: A Promising Idea Is Put To A Difficult Test