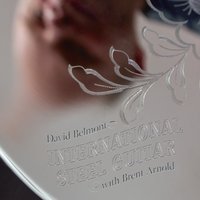 The CD opens with the most unlikely piece playable on Dobro; a Chinese zheng inspired piece titled “Bamboo Scaffold.” Belmont’s use of harmonics in conjunction with standard slide technique is remarkable and quite beautiful. From the start, Belmont proves himself a musician of imaginative technique and extraordinary musical sensitivity. He seems to find an excellent way of exploiting the instrument’s inherent acoustic properties, and is not afraid to experiment with acoustic and ambient noises.

Throughout the CD, the compositions make use of the popular and arcane musical possibilities of the Dobro. The interplay between the Dobro, Arnold’s cello and Walsh’s keys work very well together. There are some interesting uses of overdubs and other effects that are not overbearing or ostentatious. (On “Escape from Spiderhead” some backwards Dobro slips in before you notice, and then slips out the back door.) “Alizadah” takes the Dobro for a jaunt into the realm of Eastern music, for which it seems quite well suited (I imagine it’s only a matter of time before a raga musician uses the instrument for this).

All the compositions are Belmont’s, except a spooky version of the Doors’ “I Can’t See Your Face in my Mind” and a stark take on Frank Zappa’s “Watermelon in Eastern Hay.”

The CD’s only flaws are the presence of the string / slide noise on the Dobro (being a guitarist myself, I understand how this happens, and how hard it is to avoid), and the occasional inconsistencies with the vocals. But these are not off-putting in the end. International Steel Guitar is quite remarkable. Belmont made a pulchritudinous musical achievement.