New music video for The Fever. Lifted from Jeri Silverman’s debut EP Leaflike (released nationwide in 2014), the video is an artistic collaboration between Silverman and Czech artist Radka Salcmannova.

The video follows the surreal, dreamlike quality of Salcmannova’s previous works, evoking a sense that the Fever comes from the darkest reaches of Silverman’s subconscious. The track has a haunting, restless quality, balancing the singer’s poetic sensibilities with electronic grit, and folky intimacy—a sound honed with producer Saul Simon MacWilliams (Ingrid Michaelson Band). 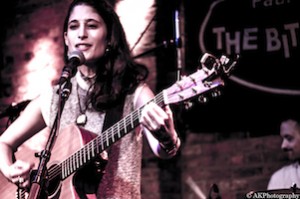 Silverman is currently carving out a place for herself in the New York music scene with her new band. Look for her new tracks in a variety of upcoming indie films, docs and webseries.

Catch one of her upcoming live gigs: