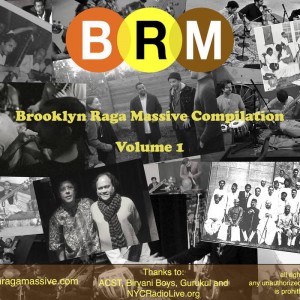 For those of you who live in the NYC area, you probably heard of the Brooklyn Raga Massive (BRM). BRM is a collective of musicians whose work is rooted in Indian classical raga. However, unlike most raga based organizations that confine themselves to the admirable (but highly specialized) task of preserving tradition, they expand the scope of their musical endeavors by making liberal use of jazz, Western classical, rock, avant garde, and other music.

During its four year history, the BRM has made some impressive accomplishments. Their weekly concerts feature different bands or Indian classical ensembles followed by a jam session. These concerts have included performances of Terry Reiley’s “In C” (which, it is important to note, was heavily inspired by Indian classical music, but the BRM was the first ensemble since it’s composition in 1963 to play it with Indian instruments), tributes to John Coltrane, George Harrison, Led Zeppelin, an upcoming tribute to Ravi Shankar, and other adventurous projects. They have attracted the attention of a number of prestigious audiences; including reviews in the arts sections of the Wall Street Journal and the New York Times. More than just reviving the brief “sitar craze” of the 1960s, they are ushering in a new era with the merging of eastern and western music, upon the foundation of, and under the umbrella of raga.

The logic of the collective’s history dictates that they release a CD. The Brooklyn Raga Massive Compilation, Vol. 1 contains an aggregate of the various members’ contributions to the emerging Raga Renaissance.

The Neel Murghai Ensemble’s “Spaghetti Eastern” is a contemplative piece that shows one of the many ways Indian and western music has more in common than may be believed.

“Simple Joys” by Arun Ramamurthy Trio is, as its title suggests, a joyful, upbeat piece with Ramamurthy’s violin flying over the almost Oregon inspired shimmering piano and liquid interplay between the bass and drums.

The ensemble Karavika (led by led by violinist Trina Basu & cellist Amali Premawardhana) contributed a piece called “Sunrise.” This piece takes the inherent possibilities of raga into a different direction. The music begins with Basu and Premawardhana creating a tonal collage reminiscent of modern western classical music, and then seamlessly merges it into a harmonized duet within the structure of the raga before coalescing into a modern embodiment of raga.

There is, ensconced within this assemblage of multifarious potential within the Indian tradition, a blend of musical genius, and a perfect balance between unity and contrast.

The BRM are succeeding in expanding the cultural manifestation of Indian music. This was an historical inevitability. When Eastern and Western civilizations first met, the cultural shock was more than most could withstand. The result was, let’s be kind and say, unpleasant. However, there were (and always will be) those who possess the vision and wisdom to see beyond the promptings of the ego that causes such ruin. Inevitably, they will find a way to unify the finest elements of their respective cultures and societies. The BRM demonstrates the ability to expand on the best of Indian music and unifying it with the best of Western music, without betraying its essence. They are the latest link in an artistic chain that demonstrates that artists, and not politicians, are the ones who hold the key to solving the problems of this world.

Concert Review: Notes from the Stage…My Experience with the Brooklyn Raga Massive All Star Orchestra