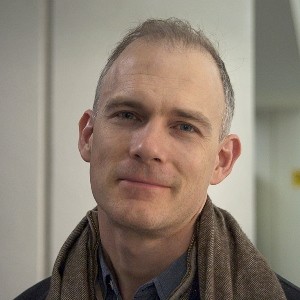 Wind Shadows is for trombone and pure sine tones. Two speakers are set up, one to the left, and one to the right, and one sine tone comes out of each speaker. They are tuned almost exactly the same. The subtle difference creates a beating pattern that sweeps from left to right through the room once every ten seconds, seeming to change volume for a few seconds as it passes the listener. The trombone stands in between the speakers, and places tones very close to the sine tones, creating another beating pattern. Each trombone tone moves very slightly, and the beating sometimes slightly slows, and other times slightly speeds up.

Even though this is a solo performance, the music comes out of a community. For technical assistance, I am very grateful to Ben Manley and Dan Joseph. For guidance in understanding the piece, special thanks to Daniel Wolf at Material Press, and Alvin Lucier himself, partly through the excellent interviews given in the MusikTexte book Reflections.

This will by my sixth performance of Wind Shadows, and my first time realizing an extended version. As this is the only piece on the program this Saturday, the preparation this time around has taken me deeper into the piece and broadened my understanding of contemplation and what music can do to support that. (Concert this Saturday, more here: http://www.mufoco.info/2016-events/2016/4/9/alvin-luciers-wind-shadows)

How does one prepare for this piece?

The most important part of performing Wind Shadows is holding the space. This requires presence, keeping my attention in the room, in my body, and in the sounds of the piece. One way to do this is to keep up my morning sitting practice and, as I go through the day, to bring my attention back to where I am. Alexander Technique has been very helpful in this, and when I go to the studio, before I pick up the trombone, I do an AT lie-down. This has the added benefit of freeing up my breathing, which is essential to maintaining the tones.

Wind Shadows is made up exclusively of long tones, requiring the ability to keep the pitch constant as the arc of the out-breath changes. As the pitches are very precise, and variations immediately apparent, a lot of practice simply maintaining a tone is essential. After my lie-down, I turn on the sine tone and play long tones against it. Sometimes I play slow scales or Orlando di Lasso motets. Part of this piece is having the necessary chops for fine control. It helps to play loud, high, and low.

Wind players are trained, from very young, to play “in tune”, especially at unisons, fifths and fourths. When we play a chord together, and it’s off, we learn to immediately adjust, kind of an ingrained auto-correct. From this perspective, the entire piece is about playing “out-of-tune”. One approach is to train myself to resist this habit.

In the interview with Douglas Simon “… to let alpha be itself” in the MusikTexte Book Reflections, Lucier mentions that he was trained as a percussionist. this was an “ah-hah” moment for me. I then understood beatings not as intonation, but as rhythm or pulse. I began to approach the piece in a new way: rather than resist my training, I began to drill and internalize the physical sensation of the beatings created by the tones. Each day, I turn on the sine tone and place a series of tones against it, creating specific beating patterns: at three beats per second, at two beats per second, one beat per second, and then three beats every two seconds, four beats every three seconds, one beat every two seconds. It’s been useful here to turn off one of the sine tones, and play against only one frequency. I create the beats above the sine tone and below the sine tone. Then I slowly slide from one to another. Three over two moves to two against one. Four over three moves to one beat per second, and so on. I drill this like I drill scales. The aim is to internalize the physicality of the beats so that I hear them as pulse.

In 2003, I heard Jürg Frey interpret John Cage’s silent piece 4’33” atMärzmusik in Berlin. He performed for 30 minutes. His thinking was that the four and half-minute duration was no longer silent–it had become a theater piece. I asked him whether he thought he was taking liberties with the composer’s instructions. He said “no”. He believed that the piece was independent of the composer, and that as a performers, we are called to follow the music. In this case, a change in duration was necessary to honor the silence in Cage’s piece–even if it meant disregarding the timings Cage had written down.

The instructions for Wind Shadows are sparse, and there is a fair amount that is left open to the trombonist. This means that the trombonist is called to make decisions about the piece that are outside of the normal responsibilities of an orchestra musician, and take on some of the responsibilities traditionally assumed by the composer. This requires care. While I am a composer, in this situation, my role is as a performer. Generally speaking, a composer organizes sounds, a performer realizes those sounds in a performance. As I am also a composer, there is a tendency for me to get ideas for new pieces. This can lead me away from the aim of the performer to honor the music in the piece at hand.

One way I check to see if I’m moving away from the piece is to talk to the composer. So I outlined my thinking on the piece based on the score and asked Alvin what he thought. One thing he said was that the piece was primarily about the beatings. This helped me to focus my further work in the roll of a performer on Wind Shadows. To keep the composer in me happy while I do so, I write down the ideas for further pieces as they come up, and put them away for now.

One fruitful discussion with Lucier concerned the duration of the performance, which is not indicated in the score. Keeping the beatings as central to the idea of the piece, I’ve tested a number of different scenarios. The sine tones themselves support a certain duration, which changes depending on how loud they are. The quieter the sine tone, the longer the performance can be. At the same time, the sine tones need to be loud enough so that the beatings created when the trombone plays are apparent, which depends on how loud the trombone is. There is a range here. As a performer, I need to assess how quiet I can play while still being reliable. Too quiet, and the tones become wobbly.