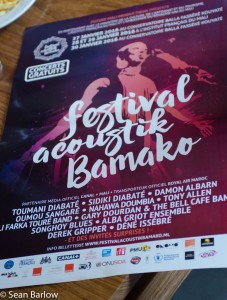 In January and February, I made my fifth visit to Bamako, Mali. It was the first time back in ten years, and I was there with Sean Barlow to research new programs for Afropop Worldwide. We were especially interested to see how musicians’ lives had been affected in the aftermath of tumultuous events in 2012 and 2013 – namely, a rebellion in the north, eight months of sharia law under which music was banned in northern cities like Timbuktu, Gao and Kidal, a coup d’etat in Bamako, French military action to restore the nation’s sovereignty, and fraught elections bringing a new, fragile civilian government to power.

The picture is complex, and in some ways, deceptive. On 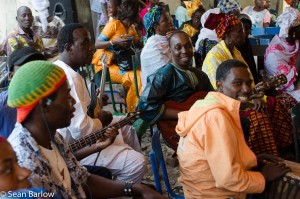 the surface, one finds a lot of music for a country still under a State of Emergency. We attended three lively street weddings, with all the raucous music and ladies in their finest gowns and jewelry bestowing money on the entertainers – just as in happier times. Nightclubs were operating with live music playing gloriously until late on weekend nights. 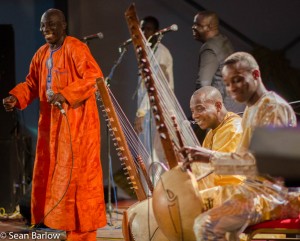 There were two music festivals going on in Bamako. Kora maestro Toumani Diabaté launched the brand new Festival Acoustic de Bamako in the last week of January. For four nights in two different theatres, local acts like Songhoy Blues, Nahawa Doumbia and Toumani’s own Symmetric Orchestra shared the stage with international visitors, notably Tony Allen and Damon Albarn. Security was tight getting into the venues, but once the music started, the mood was light and festive. Many Malian artists were in the audience for these shows, and the sense of solidarity was palpable. This was the first time international

acts have played Bamako since “the crisis,” so the festival amounted to an important statement, and all involved seemed reassured by the success.

During that same week, the Festival Culturel Dogon – usually held up north in Dogon country -also went on in Bamako, with outdoor concerts by the Niger River lasting until around 2 am for four consecutive nights. From a security standpoint, this seemed a riskier proposition, but once again, the music was great – from Bassekou Kouyaté and Ngoni Ba, to rapper Master Soumi, northern guitar maestro Baba Salah and his band, and many, many others – the vibe was cool, and once again, there were no problems at all. The same was true the following week at the Festival sur le Niger in Segou, two hours north of Bamako. This beloved annual festival did scale back, confining concerts to the festival village, rather than the river barge stage used in prior years.

Experiencing this, you could come away with the feeling that all is well with Malian musical life. But there’s more to the picture, as we’ll see in Part 2 of this report (will be published by next week).