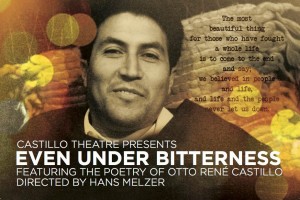 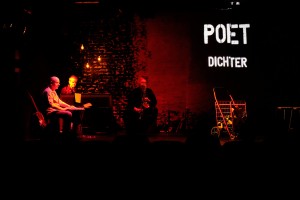 The theme of the night was Apolitical Intellectuals: What did You Do When The Poor Suffered? Castillo’s poetry was performed in English, Spanish, and German featuring Gabi Heller, Madelyn Chapman, and Olivia Luna. The poems were accompanied by video projections, and improvised live music performed by Michael Armann (music director, piano), David Belmont (dobro & percussion), and Sohrab Saadat Ladjavardi (sax, percussion & voice)

Before the play began, the audience was treated with music. They began with a blues. It was interesting to hear Saadat in a traditional musical setting, although his approach was not far from his usual style. They continued with Belmont playing the opening theme of A Love Supreme; which the piano immediately morphed into an Alice Coltrane / Pharoah Saunders I IV V progression.

The music was rudely interrupted by the traditional prerecorded announcements that precede plays.

Then the performance began. A brief video was shown with several people making statements about apolitical intellectuals and their ultimate futility and uselessness. 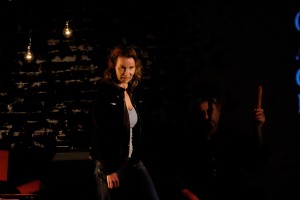 Heller came to the stage carrying what appeared to be laundry. After a pregnant pause, she began a dialogue in German. Luna entered, took her place, and began a poetic dialogue about totalitarian nationalism, the power of kindness, and the unfeeling emptiness of the people in our society. The musicians began a somber interjection while Heller shared thoughts in her language.

The music, a Coltrane-esque lament, rose to the forefront. 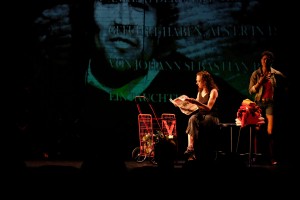 Chapman entered the stage, pushing a cart filled with empty bottles. She read a story from a newspaper about an old and impoverished woman being victimized by bureaucratic injustice, and thrown out of her home into the street. Luna began a dialogue in Spanish. A back and forth between the two women began; an English / Spanish mirroring of each other’s statements.

An abstract musical interlude ushered in the play’s next segment. Luna left, and Heller returned with German dialogue, with Chapman translating.

They both left the stage. A lively musical offering held court for a time. Then Luna came through the audience, shouting poetry through a megaphone. Chapman returned. The dialogue touched on the spiritual aspects.

At this point I must avoid more spoilers. Suffice it to say that the actors and musicians (not to mention the brilliantly conceived and executed video projections of quotes, phrases, and images) addressed Castillo’s poetry with the kind of emotional eloquence that it deserves.

Castillo‘s poetry demands it. Consider his association with Salvadorian poet Roque Dalton, years in and out of exile, his clandestine return to Guatemala to join the guerrilla struggle with the Rebel Armed Forces as chief of propaganda and education, and being captured by government forces in 1967 when he was interrogated, tortured, and burned alive. The writings and poetry of such a man (only two of his books were published in his lifetime) addressed subjects such as police brutality, bureaucracy, totalitarianism, the unfeeling greed of the rich, and the cold cruelty of those who would survive and prosper at the expense of the freedom and human dignity of others with an immediacy and passion that had to have been lived through. Even Under Bitterness gave a suitably eloquent voice to the meanings of Castillo’s poetry. 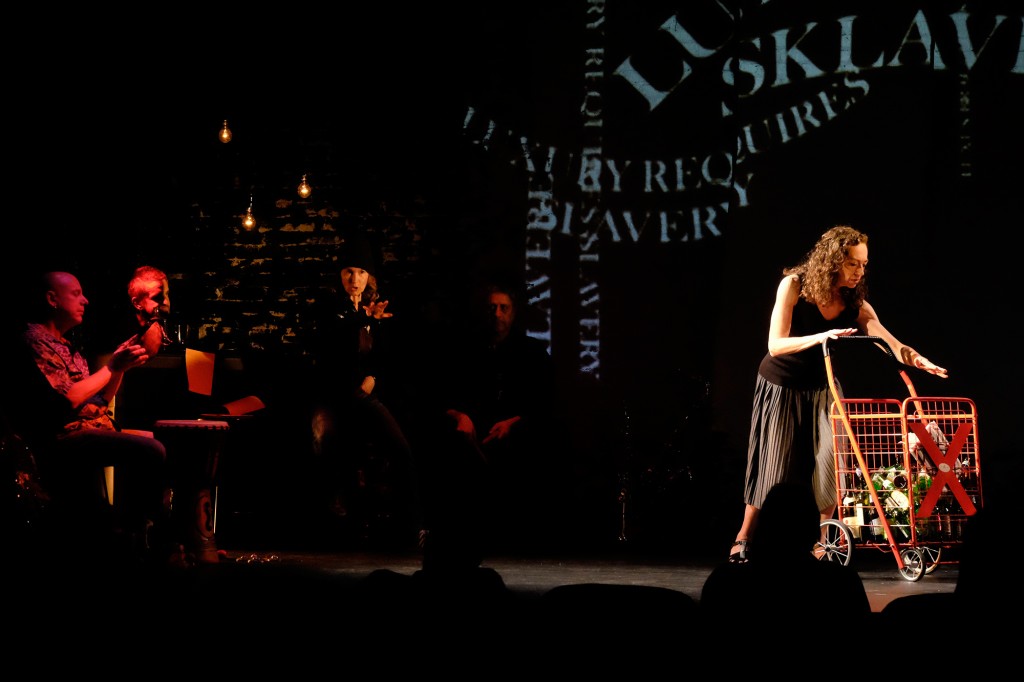 The music, I must add, was first rate. Arman, Saadat, and Belmont provided a musical underscore to the poetry and theatrics with a skillful ease that augmented the intellectual and emotional content of the poetry.

Even Under Bitterness uses theater to share powerful statements and effect positive change within humanity.