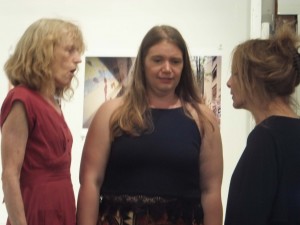 Arc Welding, an experimental improvisational a cappella ensemble with Constance Cooper, Beth Griffith, and Lauren Lee, presented a performance at C.O.M.A., at ABC No Rio.

As Cooper – who’s a member of MFM – introduced the project and performance, the others began vocalizing. It became clear immediately that this was not to be a cappella performance with songs and arrangements. The vocalizing included a wide variety of harmonies, throat singing, sounds and ambient noises.

The performers infused their music with movement. I wouldn’t call it dance; although it may be possible to interpret it as such. It was more of pantomime, or perhaps interpretive acting.

The overall impression was of a recreation of communication within an aggregate of overlapping social and interpersonal situation. The ritualism of social order was distilled and condensed into an essential reduction within their performance.

The performance had an essential feminine quality to it. Not surprising, since the performers were all women. But this quality is feminine in a metaphysical sense in that it was essentially receptive of its own sensory impressions and personal experiences of human social interaction and psychology.

The performance was clearly improvised. While some template was doubtless made for the performers to follow, this was obviously discursive. The performance followed a stream of consciousness ethic; obviously intended to reflect the improvisational nature of life itself. Thus, the name Arc Welding was vindicated.

This is a highly specialized art form with a highly specialized function. I’ve attended performances by these women in the past, in different musical settings, and I know them to be talented musicians. This performance was one of those instances that every artist must act out on occasion (I recall a conversation I had many years ago with Walter Yetnikoff former president of Warner Brothers Records. He told me about a time when Paul Simon presented a finished master of an album that was so avant-garde and abstract that he couldn’t sell it. Simon told Yetnikoff “I had to make this album.” In other words, it was a necessary and inevitable step in his development as an artist). The function of performances like this is to explore the formless and proto-chaotic elements of art and music, so that more sublimity and depth of meaning may be applied to those art forms we present to a larger audience. It is an act of searching, and a crucible wherein all artistic possibility is placed, so that the irrelevant and superfluous may be burned away. What remains is artistic truth. Arc Welding serves this function.