“The aim of the Vision Festival is to keep alive in hearts and minds, all of the idealism, integrity and sense of responsibility that lay at the heart of the creative movements in the 60’s.”

On Saturday, June 11th, the second day of the 21st Vision Festival (which featured a lifetime achievement tribute to Henry Grimes) promised a fascinating musical evening.

As I walked in, around 7pm, there was an art installation on stage. A circular projection of imagery varying between water and urban scenes in a middle eastern nation and other things hovered above the stage, while a triangular board supported by a ladder functioned as a projection screen for more imagery (the later was, I must say, ill conceived, because patrons, unaware of the existence of the projection machinery, kept walking in front of the projector, doubtless infuriating the artist). A tuba player (whom I couldn’t see, but I assumed it was Bob Stewart) provided live accompaniment; a lone vigil placing melodic signatures upon the visuals.

Miriam Parker, Wadada Leo Smith, and sculptor Jo Wood Brown presented a piece called Moving Lines. Standing in the darkened stage, Smith began with a sparse, yet authoritative trumpet solo. He took the piece through a variety of permutations; sometimes clear and melodic, sometimes abstract to the point of chaos. Parker responded to Smith’s music with dance interpretations. Her style, while clearly interpretative dance, appeared (to my admittedly untrained eye) to borrow heavily from yoga and tai chi. At times she would seemingly take the lead, and dance within silence. Her own use of props and sound effects provided interesting dimensions. The second part of their performance saw Parker exploring different dance techniques, and Smith using an approach that seemed to meld Bitches Brew period Miles Davis with vintage John Gilmore. The piece was short and succinct. I must comment that the lighting was a little disappointing. It seemed inadequate to the task of properly complimenting Parker’s astonishing dance performance. 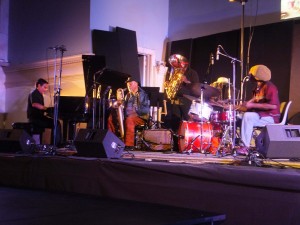 The Hamiet Bluiett Quartet, with DD Jackson on piano, Bob Stewart on tuba, and Hamid Drake on drums performed next. They began with an interplay between swinging drums and striding tuba that provided an enjoyable and danceable groove (something the free jazz scene can use from time to time). It came across as almost Dixieland jazz. After a while, however, it broke away from the festivities and immersed itself into a dark and frantic orgy of relentless search. Somehow this became a march, but this soon disassembled itself. Stewart on tuba had a powerful hold on this almost incongruous instrument. His clear grasp of its tradition allowed him the license and aptitude to expand the paradigms of the tradition without losing touch with its foundation. The interaction with the drums propelled the music into a solidification of what would normally sound like chaos. Jackson’s piano offered crystalline sounds and deft transitions between styles and moods…..

Part 2 To be continued here