Vision Festival 21..FREE-JAZZ IS A DISCIPLINED DISREGARD ​FOR TRADITIONAL BOUNDARIES!

Continued from P.1:… Jackson‘s piano offered crystalline sounds and deft transitions between styles and moods. (The way the grand piano he played was mixed, or perhaps the effect of the room’s acoustics, made it sound somewhat like an upright.) Bluiett stood above it all with an authoritative mastery and strong conviction of what needed to be said.

At one point, the music became a gaseous cloud, swirling in and around itself and abstract shaped inanimate objects. After a drum solo, the music coalesced into a joyful gospel tinged groove. After another rousing gospel of a different ilk that ran through its own world of possibilities, they continued with a beautiful and moving ballad. The piano set the stage for the sax melody. The drums provided excellent ornamentation, and the tuba assumed the mantle of arch bass with astonishing aplomb and grace. The whole piece was quite emotional and moving. After this, they concluded their set with an immersion into the blues.

The art work that was projected overhead was very well suited to the music; colorful, textured, and immersed in a multidimensional flow. The artists knew how to translate jazz into a visual image. 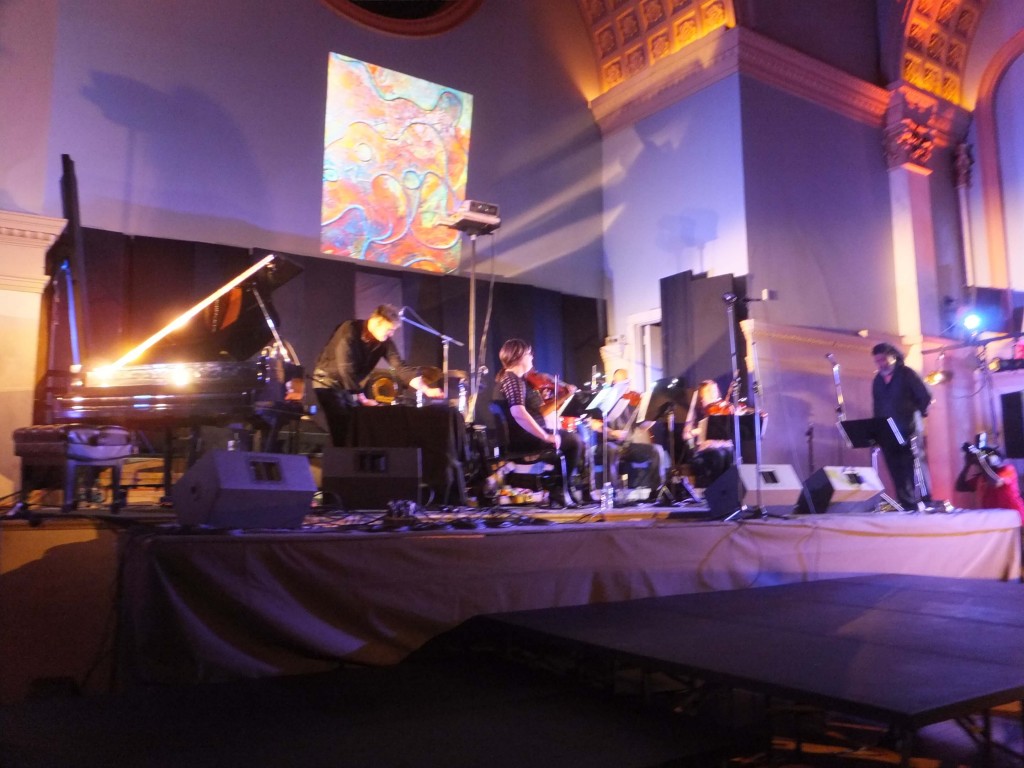 After a brilliant set by poet David Mills, Wadada Leo Smith returned with the Viola Quartet plus Electronics and offered an alternative take on what he’d played earlier. They played the Ankhrasmation composition Pacifica. Smith was joined by violists Gwen Lester, Tanya Kalmanovich, and Jason Kao Hwang, and Hardedge on electronics. The piecee began with strings and electronics invoking an atmosphere of mystery. The harmonies were sharp and angular, almost to the point of being jarring, but flowed in and out of itself like water. Smith entered with an authority reminiscent of a boxer entering the ring. He soared above the glassine shards of harmonics and insinuation of pads like a dancer making his way through an ice storm. The electronics consisted of samples and loops of ambient sounds manipulated in real time (I wasn’t able to look closely at the equipment itself; I would have been interested to see how Hardedge’s stuff was set up.) The music traveled through labyrinthine excursions of dark moods, occasional moments of tempestuous violence, and periods of intense contemplative ambivalence.

The visuals / artwork was a very good addition to the festival. It seems that this would be a good direction for Vision Festival to explore.

One criticism I have is that in some ways, the free / improvised music tradition is not being expanded. It’s in danger of being calcified and frozen in classical forms and a culture of orthodoxy. This is, of course, antithetical to the very essence of the music. Yet at the same time, a constant effort to seek change is in contradiction with the need to preserve the tradition; and therein lays the paradox. The question of how does this unique musical community hold its tradition when the essence of the music demands growth and expansion is one that the producers and participants of the Vision Festival would do well to explore. And unless it embraces these changes and growth, the free jazz / improvised music scene may live to see itself become extinct.