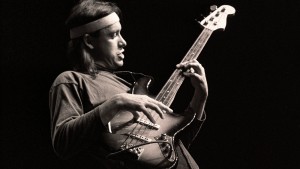 Bass iconoclast Jaco Pastorius (seen here in 1986) is the subject of a new documentary produced by Metallica’s Robert Trujillo.

The film opens with abstract visuals depicting jazz imagery to the subconscious mind, a swinging jazz piece in the background, and clips of a variety of people talking about what a bad cat Jaco was.

Finally, we see Jaco; a clip from a film from around 1983, where he was in the studio being interviewed by bassist Jerry Jemmott. We immediately see how he was being consumed by his troubles, and at the same time, how brilliant a musician he was. A clip of a concert in Tokyo, where he played an astonishing version of “America the Beautiful” left absolutely no doubt of his genius in anyone’s mind.

Thus, the documentary establishes the tone of Jaco’s life.

In a voice over, he mentions how, in his early years, there was no specific bass player he was influenced by, or even aware of. This could have been the seed of his original style of bass. All in all, it was clear he was destined for musical greatness. As he got older, he relentlessly pursued music. His first break came when he landed a job with Wayne Cochran and the C.C. Riders.

A meeting with Blood, Sweat & Tears drummer Bob Colomby, where Jaco played “Donna Lee,” led to his being brought to New York City to get a record deal. The self titled album Jaco broke him out. The members of Weather Report spoke about how they heard him, and how he blew them away. This led to his job with Weather Report after Alphonso Johnson left. From that moment on he was a star. One of the things that defined Weather Report at the time was the interplay between him, Joe Zawinul, and Wayne Shorter. Especially between Zawinul and Jaco; which was described as “like two cobras in a small cage who have to find a way to coexist.”

The section surrounding his work with Joni Mitchell and Pat Methany was actually quite emotional, because it seemed to be a foreshadowing of his early demise. During a tour where Weather Report and several other popular artists at the time played in Havana, while performing with the Trio of Doom (Jaco, Tony Williams, and John McLaughlin) he began to show signs of mental instability. There was a concert where Jaco pretty much fell apart onstage. Williams never forgave him. This acting out would increase with time. He would upstage Joni Mitchell on a number of occasions with his showboating.