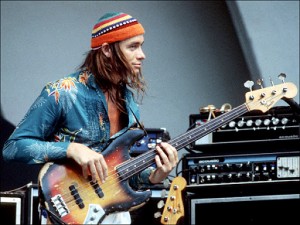 Ironically, it was the height of Jaco Pastorius‘s success that brought out his worst demons. He had problems with drugs and alcohol, problems with his marriages, business problems, and the pressures of fame. It all took its toll on him.

The documentary spent a lot of time focusing on his technique and how it developed. His use of harmonics, fretless techniques, etc. were all things that Jaco used and redefined in unprecedented ways. But much of it focused on his downward spiral. The producers approached this with sensitivity, yet without the attempt to whitewash anything. Within the tragedy and pathos of the last years of his life, there were, however, moments of light.

One example was when he was committed to Bellevue Hospital. He had a way of communicating with and reaching patients that the doctors couldn’t. But his mental problems; bipolar syndrome (wherein sometimes aspects of both mania and depression overlapped with each other) compounded with his substance abuse problem, were ruining a great musical genius. 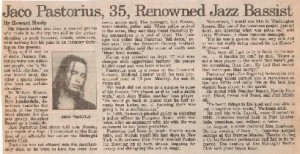 It’s interesting to note that he was not killed by his substance absue. He was beaten by Luc Havan, a bouncer at the Midnight Bottle Club in Wilton Manors, Florida, on September 11th, 1987 with whom he got into an altercation. He spent ten days in a coma, and died. Havan was charged with second degree murder, pleaded guilty to manslaughter, was sentenced to 22 months, and was released after four months.

Watching the documentary brought up strange emotions for me, and compels me to conclude with a personal anecdote.

I lived in New York City at the time of Jaco’s downfall and I was acquainted with him and hung out with him from time to time. Many people in those days had a few “Jaco Stories.” But I must share one that’s a little different.

One day, Jaco and I were drinking in a bar on Bleeker street. He and I were talking about music. Suddenly, out of nowhere, he said “You know, I tell people I like to party and have a good time. But I really want to stop drinking and doing drugs; but I don’t know how.” It hit me that he decided to say this to me, almost as if he hoped I’d have an answer for him. Unfortunately, at the time I had a similar problem. I didn’t know what to tell him, and frankly, I felt quite useless and powerless to help someone who was asking me to tell him how to save his own life.

A year later he was dead.

Jaco was one of those rare people who came out of nowhere, created something astonishing, changed everything, and left quickly.