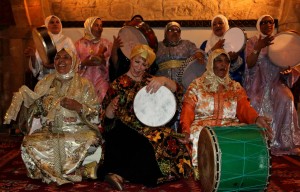 Reaching beyond borders and cultures, KLOUB NSSA is a new collaboration between Brooklyn vocalist/percussionist/composer Paula Jeanine Bennett and the Moroccan all-women vocal/drum choir The Sufi Haddarattes of Essaouira. KLOUB NSSA means heart of women. The music of KLOUB NSSA illustrates this appellation with its potent blend of propulsive drumming and layered vocals.

Paula Jeanine Bennett first met the Haddarattes in 2015 while she was in Morocco setting her folk-opera A Village of One. Armed with a fierce devotion to the groove and a box of Whitman sampler chocolates, Paula immediately found a group of kindred sisters, ready to heartily play drums, sing songs, and laugh out loud. In a room devoid of men, they immediately bonded despite the lack of a common spoken language. It was arranged through signs, signals and the google translating app that Bennett would return to Morocco in 2016 to create original music for the newly-minted group.

In composing for the project, Bennett was inspired by the writings of Catholic mystic Thomas Merton. The Sufi Haddarattes of Essaouira also have an ancient and mystical tradition.The name Haddarattes derives from hadra which means “divine or sacred presence”. All of the women share a belief in unseen forces and states of trance. Appropriately, KLOUB NSSA will headline the “Festival Hadra Feminine et Musique de Transe” in Morocco on August 20th.

With the sweet and sultry voice of Paula Jeanine Bennett, the raspy and soulful vocals of lead Haddarattes singer Rabia el Hail, the buzzing beat of the Bendir (a frame drum dating back to the Roman Empire), the deep boom of the Gnawa bass drum, and the unflagging energy of a women’s chorus clacking, clapping and chanting, KLOUB NSSA is an extraordinary innovation in musical and spiritual exploration.