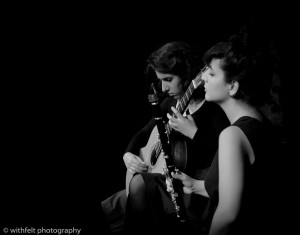 This is the second installment of a series of articles focusing on the cutting edge of Iranian Music.

When one thinks of Iranian music, images of traditional instruments, quarter-tone scales that Western ears have difficulty understanding, and songs dating back centuries with lyrics written by long dead poets sung by partially veiled women all come to mind.

To believe this is all that Iranian music has to offer is, however, a misconception. Naqsh Duo (Golfam Khayam, guitar, and Mona Matbou Riahi, clarinet) prove this.

Iranian born Khayam is an internationally known guitarist, performer, composer, and improviser. She has appeared at prestigious music festivals throughout the world. She is also a guest lecturer at the Royal Danish Academy of Music, Aarhus Royal Academy of Music, and Geneva Music University. Khayam signed with ECM Records in Spring 2016.

Born in Iran and currently based in Vienna, Riahi’s interest in contemporary music and free improvisation integrated with Iranian music earned her a solid musical reputation. She has composed and performed music for dance, theater, multi-media art, and other projects.

“Naqsh” is a Farsi word for ornamentation, form, figure or any other shape which is related to visual arts. With this as an artistic template, the duo explores the overlapping of Persian and Western contemporary music. Their approach to both the theory and execution of music fuels their search of new colors, timbre, ornamentations, and uncharacteristic sound. Khayam and Riahi are not afraid to push the envelope of the music, nor are they hesitant to invent performance techniques on their instruments that step outside the classical traditions.

They create a very personal musical language. Their compositions are based on integration of Persian instrumental/musical adaptations (form, modes, microtones, drone, rhythms, and practice of improvisation); while presented in contemporary musical frameworks. This wedding of conventional and unconventional approaches of composition and improvisation exists outside existing categories of music and geographical borders.

The music Naqsh Duo presents is amazing in its poetics. They use the paradigms of traditional Persian music within the framework of contemporary avant-garde to create their own musical language. Sometimes the music takes a startling and almost violent stance intended to shock the listener into a new state of awareness. The elements of its Persian roots are obvious to anyone with ears. But the music is never self indulgent, nor takes an oblivious or bellicose attitude toward either the audience or the traditions they are transcending. The music clearly seeks to invoke a multi-layered imagery of beauty and a deep immersion in the labrynthian depths of emotion.

I must offer a digression. Imam Ayatollah Ruallah Khomeni (leader of the Iranian Revolution of 1979) issued a fatwa before his death. He stated that music that doesn’t excite base passions is Islamically permissible. It’s not well known that Khomeni enjoyed both Western and Persian classical music. Before this fatwa, music in Iran was almost completely driven underground by religious extremists. The situation is changing, however, and now, the beauty and greatness of Iranian music is emerging in a renewed form. This, even in light of the brutal idiocy of the present political climate of the west. Naqsh Duo is among the vanguard of this new music.