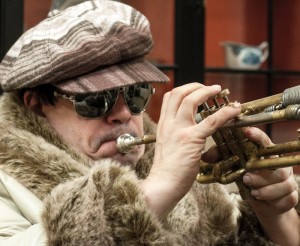 In preparation for what promises to be a truly monumental 2017, Mac Gollehon has booked a series of exciting club shows.

“Mac Gollehon & The Hispanic Mechanics [is] a fusion of EDM and Salsa, making for a unique and dramatic genre of musical energy unlike any that I have heard thus far.” – Eileen Shapiro, Huffington Post

Legendary trumpet player Mac Gollehon, or “Chops”, as Miles Davis once called him, will be performing in a series of shows across New York City in support of his acclaimed 2016 album, Mac Gollehon & The Hispanic Mechanics. The album was recorded at Bill Laswell’s Orange Music Sound Studios and has been billed as “a great mix of Latin-inspired house music, with highlighted acoustic instruments like percussion, guitars and, of course, the powerful trumpet of Gollehon.”

(Watch below video and listen to his single “No More Drama”, and look for the full album on iTunes, Spotify, or Amazon.)

Mac Gollehon originally made a name for himself playing on over 500 gold and platinum records including with legends like David Bowie, Mick Jagger and Madonna. He was also the touring trumpet player for Duran Duran. More recently he has become known for hard gigging around not just the New York scene but the whole world. In the past year he has made fairly regular trips to Japan alongside legendary artists like his old friend James Chance. Mac Gollehon has been a mainstay in the New York City scene for years now, as one of the most prominent big band musicians in the country and bringing his distinctive sounds all across the globe.