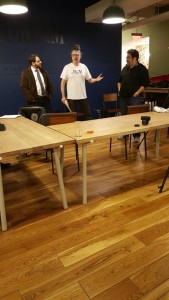 Wednesday, October 26th, 2016, Musicians for Musicians conducted (what was for them) an experiment: a semi-informal mixer. Members and non-members were all welcome. It was held at WeWork Wall Street in Lower Manhattan.

The event began with MFM’s singer / songwriter Jeri Silverman playing two songs. I had the pleasure to join on one of the songs.

Then MFM founder Sohrab Saadat Ladjavardi addressed the group with an introduction on what MFM is. He also went into some autobiographical details which explained the founding of MFM. It was an interesting story, which put many things in a context that’s not readily apparent to the casual observer.

MFM board members Arturo O’Farrill and Paul Testagrossa addressed the gathering. O’Farrill explained the need for advocacy for musicians. He believes that MFM could be the bridge between musicians union and the musician community. His organization, the Afro Latin Jazz Alliance (ALJA) is in solidarity with MFM. Testagrossa urged joining MFM, described the benefits for members. He made mention of the 6 months free membership and #MakingMusicIsAProfession campaigns (musicians are photographed holding the hashtag sign, and this is posted in social networks). 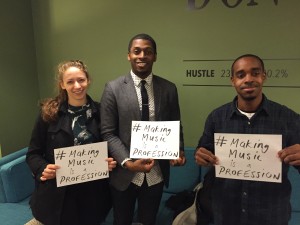 During a Q&A session, the question of legislation supporting musicians was brought up. MFM is gearing up to be able to address this, to approach Albany and Washington DC in a position of power wherein our voice can be taken seriously.

An audience member brought up the question of licensing musicians as a profession (similar to a plumber or doctor). This is a somewhat vague idea that doesn’t allow a proper definition of what qualifies someone as a professional musician. The exact definition of a professional musician was discussed in considerable detail…Continue reading here: http://musiciansformusicians.org/conference-or-event/mfm-mixer-musici…ans-brings-table/