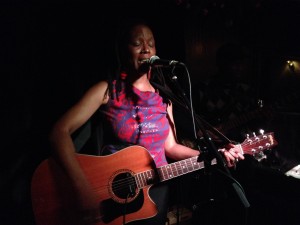 On the cold damp night in the second day of 2017, I left the comfort of my home, and ventured downtown to the Bowery Electric where Lindsey Wilson and the Human Hearts Trio was playing.

Wilson (vocals and guitar) – a MFM member – was joined by longtime partners Reggie Sylvester on drums, and Michael Trotman on bass.

Wilson greeted the audience as one would a group of friends: a few casual words about the music they were to present this night. It would be an eclectic collection of songs of consciousness, and what she termed “expansion music.” Thus, the tone was set.

Sylvester started with a high hat driven beat for a song called “Symbols and Degrees.” Wilson and Trotman then came in with a soul / funk groove in C. The lyrics and overall mood of the song hearkened to times when socially conscious messages in popular music was the norm. Then they segued into their next song; an angry, passionate plea to awaken oneself called “Face the Music”.

The next song, “Fight Back”, was a blues. The message of the lyrics was simple: things are getting bad, so live peaceful and honorable lives, but you gotta fight back when you’re being attacked. The song evolved into jazz with free vocals holding the “gotta be brave, don’t be slaves” refrain.

They followed with a song of a different vibe called “Kaleidoscope Melodies.” This was a happy song celebrating the goodness and beauty of life. There was an unmistakable vein of Joni Mitchell in the mood of this song. But it was still Lindsey Wilson.

Between songs, Wilson joked about “I screamed at you a little bit, now I’m gonna tell you that I love you.” Human Hearts softly went into a love song with a very bright feel. They followed this with a cover of the Eurythmics song “Missionary Man” approaching it in an almost country blues / gospel fashion.

When the applause faded, Wilson said “This is where we get deep y’all.” This hard forewarning ushered in “Tides;” a song dedicated to Trevon Martin. The song started with a sad delicacy. It evolved into a quiet intensity; the lyrics painting a brutally vivid picture of the injustices in the world. Yet there was an unmistakable undercurrent of hope.

An original song titled with a South African word derived from the Xhosa tribe called “Simunye” meaning we are one was next. Trotman’s hypnotic bass line drove an intense beat over which called for a revolution of the mind was sent out. The song eventually went into a hypnotic dance where Wilson took a step back, and Trotman and Sylvester showed us their musical mastery.

They concluded with a song “about abundance for everyone” called “Piece of Pie (40 Acres and a Mule)” Here, the Joni Mitchell influence resurfaced, this time with a jazzy vibe.

Wilson’s vocals are perfectly suited to the style of her music and the message her lyrics send. She exudes a vibe of sincerity and compassion that one feels immediately comfortable with. Her guitar work provided a colorful and nuanced background upon which she placed her vocal work. Sylvester is one of those drummers whose playing not only carried the groove and can swing, but adds to the mood of the song. Trotman is a solid bassist with a marvelous sense of melody. They all blend beautifully together.

Wilson and company proved that the days of socially conscious music with a spiritual undertone are not gone. All things considered, we need this now more than ever; and Wilson is among those standing at the forefront of its return.