On Monday April 3rd, musicians, artists, actors, poets, and dancers assembled on the steps of City Hall to protest the attempt on the part of the Trump administration to destroy art and culture in the United States. This press rally “Save The Arts” was organized by Councilman Jimmy Van Bramer. 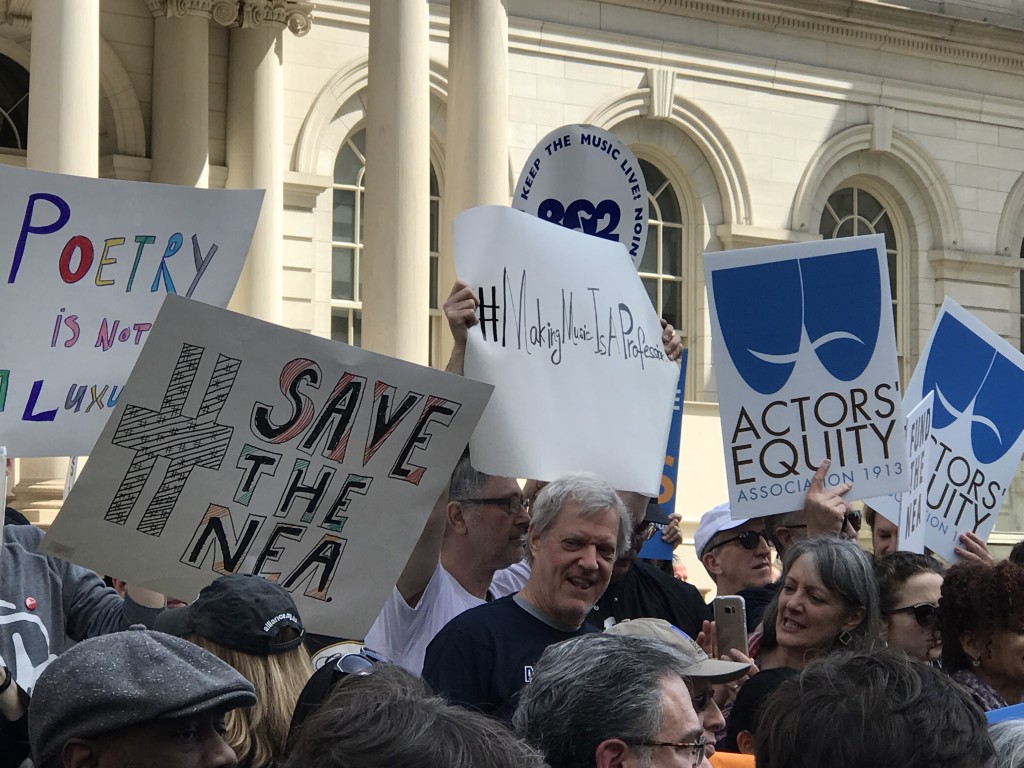 As a fledgling advocacy group whose mission is tackling a variety of problems facing the musician’s community, Musicians for Musicians’ (MFM) presence was an important step. MFM’s president Sohrab Saadat Ladjevardi stood on City Hall steps with the aforementioned established organizations as an ally to represent solidarity on this vital issue. 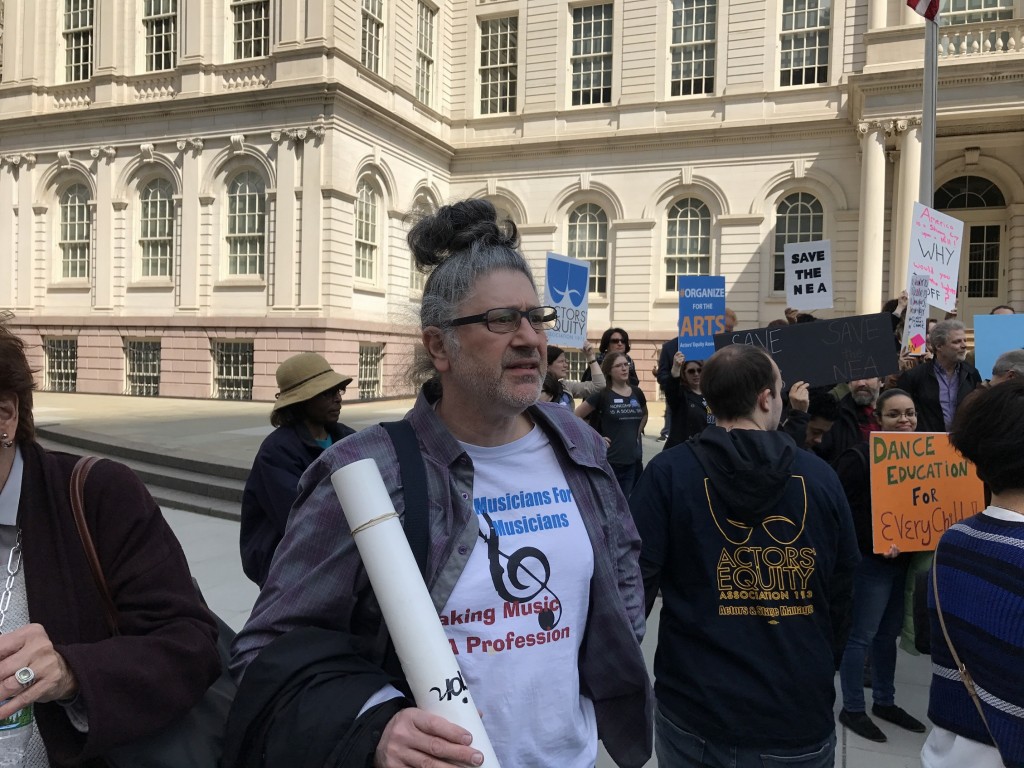 The rally opened with Councilman Jimmy Van Bramer addressing the crowd. It was difficult to hear because the microphone was not on, and a music group were playing on the other side of the park. They were part of the protest.

David Byrne‘s brief statement presented statistical evidence that the arts stimulates the economy and business, reduces crime, and provides an impetus for outside investors. The economic advantages of arts funding was a major point that was brought up time and again.

Jilani Ramy, who plays Simba in the Lion King sang “Somewhere Over the Rainbow”. Regrettably, it was difficult to hear him at times. Undaunted, the protesters joined him. Other performers, including Ben Wexler, offered brief performances.

The Commission of Cultural Affairs brought up that NYC was number 2 in funding the arts. He pointed out that all of the mayoral administrations since Dinkins invested in the arts. And he is committed to continuing this, in defiance of the wishes of the Trump administration. 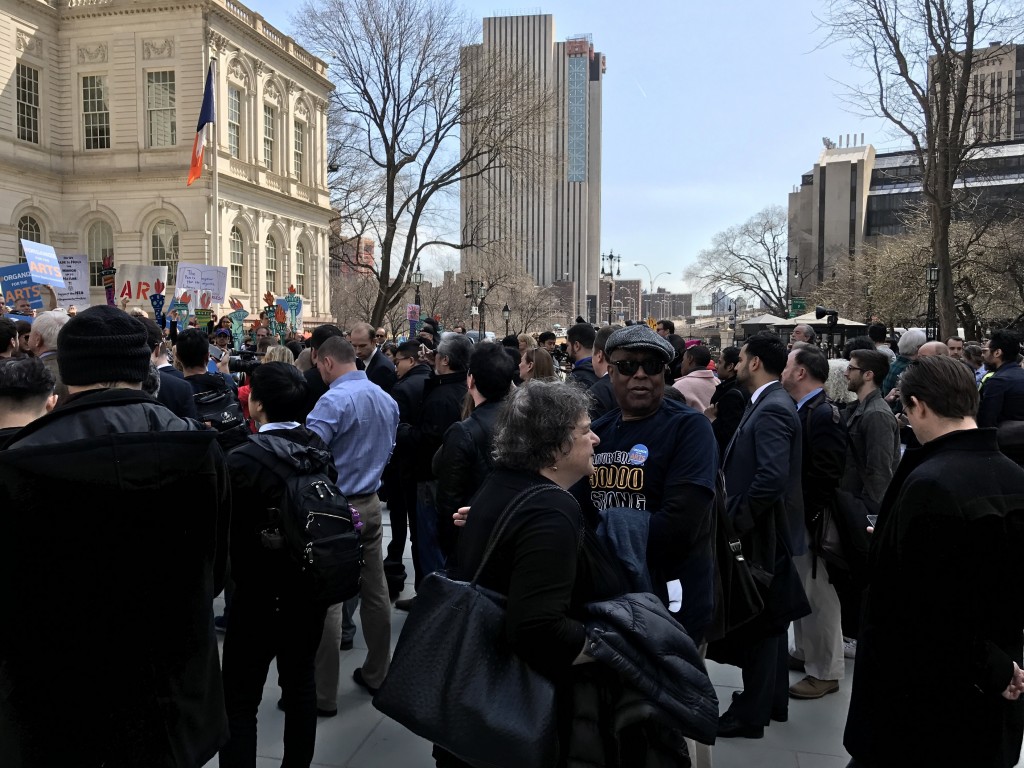 This brings up a point of importance. The social, psychological, and personal advantages to the arts was a major point of discussion among the speakers. It is a provable and indisputable fact that the arts enriches society, lowers crime, and adds an invaluable dimension of imagination and inspiration to all humanity. This alone justifies the comparatively minuscule cost of subsidizing, or more precisely, investing in the arts.

And it is minuscule. The National Endowment of the Arts (NEA), consumes a total of 2% of the annual federal budget (this adds up to approximately $1.34 per year of federal tax payments by every US citizen). Trump wants this to be allocated to military spending which already exceeds the total military budget of every other country on earth. His decision is clearly designed to generate profits for arms manufacturers (which Trump may very well be profiting from; in direct violation of the Emoluments Clause of the US Constitution; an impeachable offense).

The unmitigated gall of Trump to eliminate funding for the NEA and privatize the Corporation for Public Broadcasting is beyond arrogance, and is unprecedented in US history. His assault on the arts will have a damaging effect upon the spirit of the American people, and on the economy and business. The later proves that this is an unbelievably stupid decision, coming as it is from a man who claims to be a shrewd businessman (which he really is not, considering the long list of utter failures he headed). 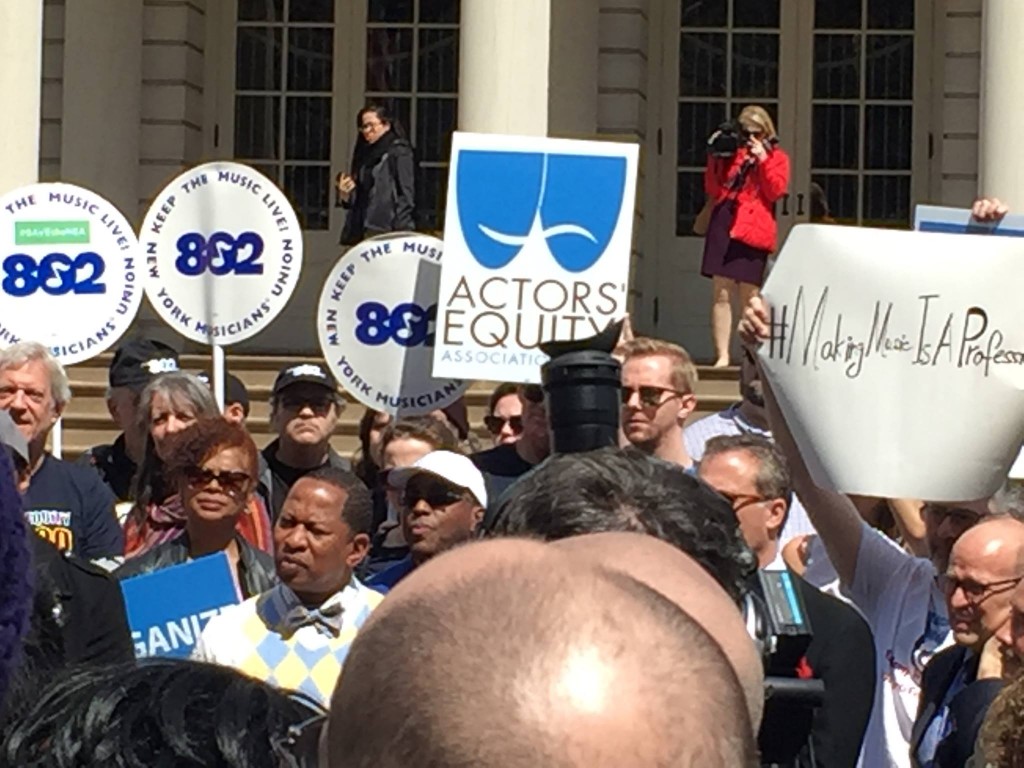 To add insult to injury, the cost of keeping Trump’s wife in Manhattan (who refuses to live in the White House with her husband) exceeds the total cost of annual funding of both organizations.

I know it’s too much to hope for that the Orange Overlord will ever read this. But if he did, I have this to say to him. You talk about making America great. You can’t make something great by destroying its soul. The artistic community of New York, and the world are aware of what you’re up to, how you’re doing it, and why you’re doing it. And we’re not having it.

Check this video out: http://www.thirteen.org/metrofocus/2017/04/april-4-2017-standwiththirteen/#.WOR2uo5trH8.facebook