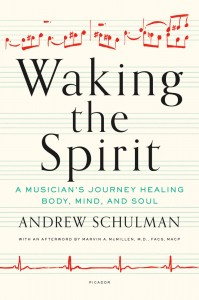 Musicians for Musician (MFM) presented the second of its Talk Series with Andrew Schulman, author of Waking the Spirit: a Musician’s Journey Healing Body. Mind, and Soul and creator of a profession he calls medical musician.

The event started a bit late. While wrestling with a few delays, the musicians in attendance passed the time by doing what musicians inevitably do, share stories.

Schulman began the event with a beautiful instrumental offering of variations on the Brahms Sextet in Bb, and then George Harrison’s Here Comes the Sun on his 8 string guitar.

The event was more informal than they usually are. Schulman took the leading role of the event, with MFM founder and president Sohrab Saadat Ladjavardi acting as moderator. 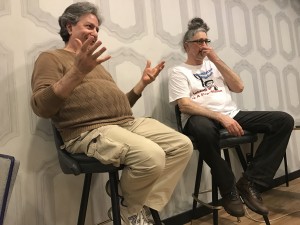 Ladjavardi described how he found Schulman through Allegro; the Musicians Union magazine. He wanted to make contact with Schulman because he embodied an overlooked aspect of music professionalism.

Schulman gave a very detailed overview of his personal history, and how he became a musician and later got interested in music as a healing art. Schulman shared anecdotes about his experiences in the music business He spoke of the time he met Robin Williams. It was a moment of epiphany, because he saw the innate sadness that possibly led to Williams’ suicide. Much of his monologue was centered on the bygone era, of the music business of the 70s, 80s, and mid 90s. It was interesting how the dynamics and paradigms of business for professional musicians changed over the decades.

Eventually, Ladjavardi took control and directed the discussion to the subject of musical medicine. He began by asking Schulman how he created his own branch of musical professionalism.

Schulman spoke about the life threatening illness (including 17 minutes of brain ischemia) that led to his developing his profession. While he was in a coma and the doctors certain he was going to die, his wife had an epiphany, and played Bach’s St. Matthew’s Passion for him on his iPod. This prompted a response in him that drew him back to life. He had a coma dream (which compares to a regular dream like a Fellini movie compares to a dog food commercial) where he was walking down a suburban street during Christmas time. He met a man and asked where the widow lived, and the man pointed to a house. He knocked and the widow opened the door. It was his wife, 40 years later. He walked in, and tried to play his guitar. He couldn’t, because he was too tired. But suddenly found himself playing the aforementioned Bach piece.

The definition of a medical musician is a professional musician who is a member of a hospital or health center’s medical team who uses music for medicinal purposes. It is not the same thing as music therapy, which is music used as psychological therapy (although there is some overlap). He is in the process of making it an accredited profession. 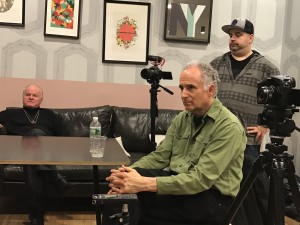 He concluded by describing the technical aspects of how he approaches music medicine. An important part of it is being able to diagnose exactly what music needs to be played, and how to play it (a large repertoire, and the ability to improvise is essential). He learned to look for agitation: if they like and respond well to his music, there is usually no outward sign, but agitation will indicate what he should not play. And it’s important to leave one’s ego at the door: music medicine does not exist for the aggrandizement of the artist. Knowledge of medicine is important. Also, the skill set of the musician must match that of the medical staff. There is really no set formula to this; it requires great knowledge, intuition, and improvisational skill.

After some lively discussion with the participants, Schulman closed with a beautiful piece called Little Theme in D, by Peter Williams. It’s something he plays for a patient when everyone is agitated and worried.

It is no secret that MFM aggressively promotes the concept of music as a profession. However, there are within this many variations. Some are yet to be discovered. The situation is such that that it’s an essential survival tactic that musicians be extraordinary imaginative in the presentation and implementation of their music. The creation of a new profession, however, requires not only the vision and inspiration to create, but the determination to make a tangible reality. Schulman has proven that the possibilities of music as a profession have not nearly been exhausted, and that these possibilities extend beyond the limits of “art for art’s sake” and well into the realm of service to humanity.