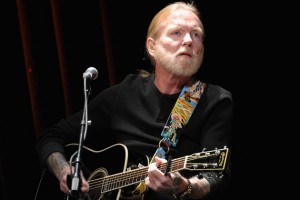 Despite his personal dislike of the term “Southern Rock,” Gregg Allman built a successful career and left behind an impressive body of work that not only defined the genre, but transcended it.

Gregory LeNoir “Gregg” Allman (December 8, 1947 – May 27, 2017) was an American musician, singer, keyboardist and songwriter best known for performing in the Allman Brothers Band. Born and raised in Nashville TN, before relocating to Daytona Beach, FL. He and his brother, guitarist Duane Allman, developed an interest in music in their teens, and began performing in a number of bands before forming the Allman Brothers Band in 1969. They achieved notable success with their unique blend of rock, blues, country, and jazz.

Allman’s solo work was on par with the best of the Allman Brothers’ music. His blues infused, worldliness and wisdom learned the hard way gave his songwriting and singing it’s distinctive character.

In 2009, the Allmans performed at their annual residency at the Beacon Theater in New York City in celebration of their 40th anniversary. Allman’s work was eventually hampered by health problems. He announced his retirement in 2014. On May 27th, 2017, Allman died of liver cancer. He was buried next to his brother Duane.

Allman was one of those rare breeds of musicians who managed to fight through both professional and personal obstacles and leave behind a legacy of great music.

“Music is my life’s blood. I love music, I love to play good music, and I love to play music for people who appreciate it. And when it’s all said and done, I’ll go to my grave and my brother will greet me, saying, “Nice work, little brother—you did all right.” I must have said this a million times, but if I died today, I have had me a blast.” – Gregg Allman