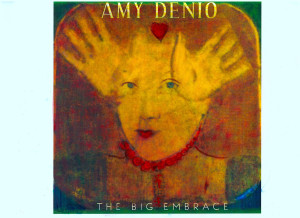 The Big Embrace is her latest endeavor as a solo artist.

The opening track, “l’Abbraccione,” begins with an acoustic guitar foundation and scat vocal melody. It has an indefinable Joni Mitchell flavor to it, yet is distinct from any identifiable influences. The chords hold an interesting blend of unity and contrast. As the track progresses, vocal harmonies ease in and add an interesting dimension to the vocals.

“Romadame” follows. A guitar figure vaguely reminiscent of French jazz starts the song. Denis sings a self descriptive lyric that stands in defiance of anyone who would pigeonhole her or label and classify who they think she is. The background vocal harmonies have a very liquid quality; glissando slide in and out of each other, daring the listener to pin down what she is doing. It’s almost as if she feels the listener must earn the right to know what the music (or her as a woman) is all about; yet, gives hints and keeps the invitation open.

The third track, “Thanksgiving,” takes on a different mood. It begins with an ostinato of bell like tones over which she sings of a “day of mourning” (it’s obvious she doesn’t care much for the Thanksgiving holiday). A light saxophone part adds to the rhythmic pattern, hiding behind the bells like someone reluctant to be seen.

“Zap Sistah” is an acapella piece accompanied by hand claps. The nod to the famed ensemble Zap Mama is impossible to miss.

Some of the tracks have titles beginning with “Rx.” “Rx for the Afterlife,” “Rx for the Wife,” and “Rx for a Scrambled Egg and Peanut Butter,” and “Rx for Recife” are all very different, yet tie into each other in Denio’s concept.

Denis is an imaginative instrumentalist. She is no shredder or chopsmeister; nor does she need to be. Her use of instruments is more akin to the colors a painter would use to paint a picture: the picture is all that’s important, the colors serve that purpose. Her knowledge of music and her concept of what she is going for is very solid. The instrumental “Prostrate Before a Periwinkle” (with its interesting and imaginative use of winds and Denio’s signature harmonies) is indicative of this.

Her lyrics show an idiosyncratic view of the world. She’s clearly intent upon expressing a very personal view of her own world. Some of the songs are overtly political. “Boat People” (a nod to Vietnamese refuges), “Donald the Lump” and “I Love this Cunterie” (jarring jabs at the current presidential administration, with clever samples of the tyrant’s voice woven into the vocal harmonies), and “Biopsy of Statecraft” (with a lament of lost freedom and liberty).

The aggregate of influences Denio has been exposed to in her impressive career has released within her the means to express a unique music. Earlier I mentioned Joni Mitchell as a possible reference. But this is misleading. Denio is very much her own artist, has a lot of relevant things to say, and an artistic and unique way of saying it.

CD Review: Ou… a joyful, multidimensional romp through the Mediterranean and the Americas that will make you want to think and dance at the same time