On a cold December night, a few days away from Christmas, the CA Music Room (a beautiful and intimate performance space owned and operated by Clara Aich) hosted their first and last performance of 2017. 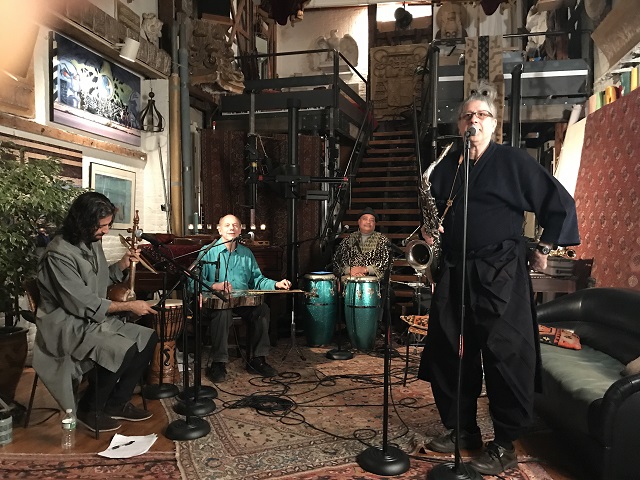 After a brief introduction by a kimono clad Saadat, Baba Don began with mallets on cymbals. Belmont responded with a subtle dobro figure. Saadat spoke in German, asking the audience to be still / silent (if I understood the words correctly). It was clear the element of performance art would be part of the concert. 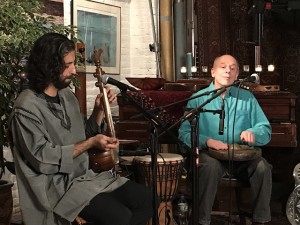 Belmont and Haghtalab went into a simple three note melody. The timbre of the two instruments created a Japanese / Zen atmosphere in which Saadat infused a lovely melody on saxophone.

Belmont took over with a poem of his own, with sparse ambient percussion accompaniment. Saadat clapped out a rhythmic pattern with Baba Don answering with ambient sounds. The three note melody re-emerged. Haghtalab responded with a poem in Farsi, with Saadat introducing another rhythmic pattern. Then Baba Don offered his own poem. The others infused his discourse with sound and notes like incense smoke.

Suddenly a percussion rhythm with shades of hip hop stepped authoritatively to the forefront. Saadat stepped forward with his saxophone and led the music into a permeation of the three note melody. This time, the Japanese contour was gone, replaced by a more blues flavor. Haghtalab responded to Saadat’s exploration, and the song “Silence” drew to a close.

The next song was “Khorasan.” Saadat and Haghtalab spoke of Khorasan a province in Iran that is known for Sufi traditions, and beautiful deserts. Haghtalab brought out a radif with a beautiful, other worldly mood. Saadat spoke over it, a poem about the place, and the fire it instilled in his spirit. The music became more impassioned. Saadat stepped in with his soprano saxophone. The melody he played had a different quality from the radif Haghtalab played. A percussion duet emerged between Baba Don and Belmont. It ended with Saadat reaffirming the melody.

Baba Don pulled out a harmonica and began to play “Everyday Blues,” with Belmont accompanying him on dobro. Saadat responded with spoken word about life and how he experiences the blues. It stopped abruptly, and then they began an upbeat blues. It was a little incongruous with the interplay between the dobro and kamancheh. But it made its point clear. Haghtalab took a solo that bridged the gap between American blues and Persian radif. Belmont took a solo that was closer to the American feel of a blues. 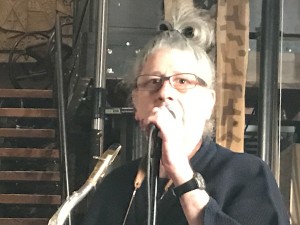 Between songs, Saadat spoke about his history as a musician. He was a “late bloomer;” starting on saxophone as a young adult.

He then started “My Shushtari” a Persian sounding melody on soprano saxophone (which he joked is nearly impossible to play in tune). This became one of his compositions; a melody that seemed to dance and flirt with the percussion parts.

The next piece “Sad Sake” was dedicated to a Japanese musical style called Enka. Belmont started a melody based on a pentatonic scale (1, b2, 4, 5, b6; which appears in a lot of Japanese music, Balinese music, and some Indian ragas). Saadat brought the composition structure on tenor saxophone, adding different nuances. Haghtalab played a solo, plucking the strings of his kamanche and creating a strange delicacy the western ear would associate with Japanese music. He them returned to the bow; which brought out a different dimension of the piece. Saadat’s saxophone took over.

A powerful burst of Afro-Caribbean percussion burst forth from Baba Don’s congas and djembe. The other musicians stepped aside and gave him free reign. The audience was roused to their most exuberant and demonstrative responses of the night; it was impossible not to be roused by his music.

An aggressively sad melody broke out of Saadat’s saxophone…“Enough Is Enough.” The others responded with an intertwined counterpart that coalesced into a groove. The saxophone motif brought everything to a close.

After a very short break, the music continued. Saadat started with “Look At Me” a spoken word piece with an insistent beat behind it. He took what was his most jazz infused solo so far. Haghtalab took over on kamancheh; playing with a restrained aggression that was needed to work in the rhythmic context (the kamancheh is not an easy instrument to play aggressively: it’s best suited for more delicate music).

Baba Don started another rousing beat “Heavy Funk,” accompanying himself with a chant. Saadat responded, and brought in his saxophone. He later called it “chamber funk” – an appropriate title. 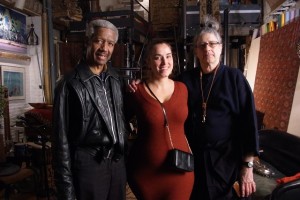 Between songs he spoke about being a proud musician, and introduced a few of the musicians in the audience (such as Billy Harper).

On their next piece “What’s What,” Haghtalab played some very fascinating harmonic drones on his kamancheh that evoked new musical emotions. Belmont played very percussively, taking his cues from Baba Don. Saadat’s saxophone and spoken word built upon this foundation.

When the song ended, Saadat asked the audience to pull a coin from their pockets. He used it to demonstrate that there are two sides to everything – and that the beginning is an end, and the end is a beginning.

Then a meditative piece of music “A Beginning Is An Ending, An Ending Is A Beginning” came up. It evolved into an almost gospel flavored dance. Overtones of country blues eased in and out of the interplay between the dobro and kamancheh. Saadat began a wordless chant. The music rose to a crescendo. Then, silence.

Thus ended the SoSaLa concert of 2017.

This was chamber music, infused with subtle elements of performance art. Yet, it would have worked just as well in a large venue. Each musician brought their own strengths to the mix: Saadat constantly moving forward with his unique vision, Belmont adding depths of familiar yet unexpected colors and textures, Haghtalab bringing his sublime musical poetry, and Baba Don with his authoritative presence and worldly wise manner. The purpose was to create an inner experience for the audience, a musical excursion in the places where cultures overlap, and new emotions are felt. And the concert was a success. The audience went away knowing they’d bore witness to a rare and beautiful event.

Saadat had begun the concert by speaking about how he’d taken a hiatus from performing in order to concentrate on his duties as president of MFM. He has, of course, kept his chops up, as his performance tonight made clear (being a consummate professional, he would do nothing less). But it’s clear the time has come to bring his music and his vision once more to a live audience.