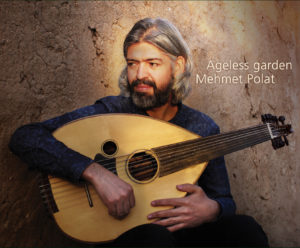 The word “Hasret”is an Urdu word (derived from the Arabic word “Hasrah”) meaning “unfulfilled wish,” and a popular term for Urdu poets in India and Pakistan. “Hasret,” is also the first track on Mehmet Polat’s new CD Ageless Garden. The opening notes of Polat’s oud speak in a quiet yet authoritative voice against a subtle percussion background. As the piece progresses, unusual melodies and startling harmonies create an emotional intensity that eloquently expresses the longing within an unfulfilled desire. It ends with a return to the introductory melodies, except with a sad resignation.

member Mehmet Polat is one of the most innovative oudists on the music scene. His approach extends the boundaries of the instrument’s traditions. Ageless Garden is Polat’s third CD. His trio’s previous releases (Next Spring, and Ask Your Heart) were forays into a seamless blend of diverse cultures, with Polat’s oud as the cohesive force behind them. His new release, however, is a solo effort, and his masterful and unique oud playing are center stage. Guest musicians on the album include Alper Kekec (Turkey) on darbuka, daf and frame drums; Pasha Karami (Iran) on tombak; Shaho Andalibi (Iran) on ney; Yama Sarshar (Afghanistan) on tabla; and Zoumana Diarra (Mali) on kora.

On “Aylan,” Polat makes use of his modifications on the oud (he added two bass strings). The depths of the notes he plays are somewhat startling. The range defies our expectations of what the instrument should be capable of.

“Hasbihal” evokes a different mood and a different dramatic. This has a sadder and more sedate mood than the previous tracks. As the piece grows, so does the power of this strange sadness. One imagines the Oud weeping, as it tells its story in a language one understands only with the heart.

The remaining tracks explore an entire spectrum of moods and emotional expressions. “Aftab” has a sense of anger, as if Polat is blowing of steam about some past insult or injury. “My Urfa” is a brighter and happier piece which starts with a smile, and ends in a joyful dance. “Embrace It” bring in Diarra’s kora and Andalibi’s ney. The appearance of these instruments are a departure from the central figure of the oud, and add an interesting breadth of dimension to the composition. “An Anatolian Bulerias” has flavorings of flamenco running through the piece’s Turkish / Middle Eastern composition and execution.

Polat was quoted as saying “I composed these ten compositions during different phases of my life as a migrant musician. And I play them on this album through the lens of my vision of today.” The music here is clearly an intensely personal statement. The listener is allowed a privileged invitation into a world that one is almost hesitant to look at. The intimacy is almost painful, yet undeniably beautiful.