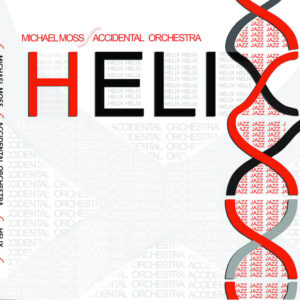 A dissonant, yet strangely colorful and delightful series of chords emerge with a startling intensity. A moment of silence, then the music ambushes the listener with a dense tapestry of chromatic melodies weaving in and out of their own musical ecosystem. instruments jump to the forefront, then slide away to the shadows, to be replaced by other musical entities seeking expression. About halfway into it, a tabla places a simple teental, and without warning, the orchestra merges with it in a Sun Ra-ish swing. Eventually, the bass holds down the groove, and saxophones engage in a serpentine dance, like a fight to the death in a kung fu movie. The bass steps in and brokers peace between the two gladiator, and the percussions, violins, and cello offer their support. Suddenly, a strange chord overshadows them, and the music ends.

This is “Inception;” the first part of the suite ”The Old One” by Michael Moss and the Accidental Orchestra.

A native of Chicago, Illinois, Michael Moss pursued his education in Madison, Wisconsin. After this, Moss became part of the New York jazz scene, a position he held for the past 50 years. Moss has also studied in Thailand, Middle East, Ireland and elsewhere across Europe, East Africa, and other places. A master of multiple reed instruments, and compositions. Moss played with Sam Rivers, Dave Liebman, Paul Bley, Annette Peacock, Elvin Jones, McCoy Tyner, and others. Whether playing in a duo or in an orchestra, Moss knows how to handle himself. His musical inspiration are not limited by genre, culture, or historical period. (He’s also a member of MFM.)

“Inception,” and the other parts of “The Old One” (Albert Einstein’s personal name of God) serve as a musical process of initiation into sacred ground. “Bridge” swings, walks, and flows like a rich liquid, as if it is urging you to follow its path. “Qabbala” starts like the surprise one feels when entering a room that one did not expect to contain its wonders. It eventually collects its wits and explores the new environment, assimilating the sights as best it can. “Bardo” takes the emotional content of the previous piece to a place where the entry into the new environment is tainted with fear. This fear is part of an initiation rite that one must master in order to achieve a place in this enlightened realm. Finally, “The Mind of God” articulates the merging with a higher station of being and spirit. Yet with this, one realizes that one’s journey has not ended; it has only begun.

The final track, “See Sharp or Be Flat” Begins with a shout of joy. It’s a jazz expression of an acceptance of all the good and bad things life throws at us.

Free jazz is really hard to play well, and really easy to play badly. To transcend the constant danger of self indulgence and perform music that serves to communicate real ideas and real experiences in service of higher ideals is the sign of a master. Michael Moss and the Accidental Orchestra have accomplished this. I’m reminded somehow of the early 20th century French composer Dane Rudhyar, who treated musical notes as if they were organisms or molecules. Moss cultivates an intricate musical garden, then allows it to run wild, knowing quite well the trajectories each living thing will take.