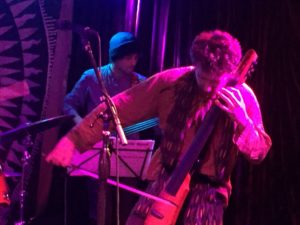 Formed in 2014, 2Birds Band is a unique string trio with drum and bass guitar rhythm section that fuses the European classical tradition with contemporary styles and musical unpredictability, and explores the boundaries of violin and cello through a unique blend of musical styles. They have performed and taught music clinics in Boston, New York, Toronto, and France, and have three releases; First Flight (2015), For Lack of a Better World (2016) and String Groover (2017). The members on this night consisted of Antoine Beux (aka Tony Bird, violin), Volt Bird (violin, who was subbing for Gabe Bird), Martin Beux (drums), Carlo De Biaggio (bass, who was subbing for Evan Wierzbicki), and George Crotty (electric 6 string cello).

With no warning or introduction following a brief sound check, 2Birds Band began their performance. A dissonant collage of melodies and tone clusters appeared out of nowhere. A melodic exploration in a vaguely Middle Eastern vein appeared, and gave way to a hard funk beat. Then the violins laid down a syncopated pizzicato, and the main body of a lively fusion emerged.

Without hesitation, they went into their second song. The violins started a duet, and the band blasted into another fusion funk. After riding this energy like a surfer in a storm, the song seamlessly morphed into a Bartok-esque lament, and ended.

They continued with another high powered piece that blended jazz fusion with heavy metal, vague suggestions of Irish rock, and a brief digression into mid 20th century classical. It abruptly ended with a knockout punch.

The next offering saw the violins playing a percussion part on their strings. The drums and cello answered. This coalesced into a harmonic vamp between Crotty and Beux, while Volt played the melody. This percussive groove and pizzicato ornamentation formed a solid environment. Volt evoked a marvelous contrast with deceptively gentle melodies. It reached an interesting climax.

The next piece was called “Mr. Prudential.” This was another jazzy powerhouse that drove itself maniacally through the various stages of the composition.

The next piece “Christiania” was dedicated to MFM. Crotty (who joined with Antoine Beux  MFM recently) spoke to the audience of MFM, and emphasized the MFM concept of “making music is a profession.” This song started with some fascinating use of harmony and rhythmic devices. The inevitable grooves and fusion melodies came out of the almost abstract intro, and unfolded in the inventive was the audience had come to expect. There were all manner of twists and turns, colors and textures.

Then they offered a piece that was a tribute to The Joker (from the Batman mythology). Atonal, jarring harmonies crept in and out of the shadows. This solidified into a hard grove. Weird, twisted melodies attached themselves to the groove and threatened to tear it to shreds out of sheer psychotic delight. After reaching a feverish pitch, a mysterious pizzicato ostinato worked its way to a dominant position while the drums fought for release from the insanity in which it felt trapped. This climaxes in a battle to the death between all the instruments. An uneasy truce was called, and the song’s main melody returned. It ended on some frightening harmonies with Bird’s violin “laughing” like a lunatic. It’s difficult to imagine instrumental music representing the Joker character and personality more eloquently.

Their final piece was a cover of Led Zeppelin’s “Immigrant Song.” Needless to say, they more than did justice to the original, hacking their way through with the Viking-inspired joyful violence the classic rock song demands. 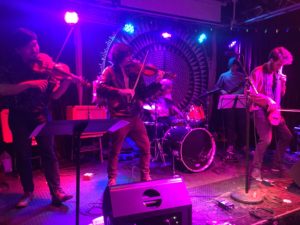 2 Birds Band played together beautifully. Tony Bird is an amazing violinist whose chops and musicality are augmented by his very animated and engaging stage presence. Volt complimented Bird perfectly, and held his own with his own subtle yet powerful work. Crotty is a remarkably inventive cellist; always providing a colorful harmonic tapestry. De Biaggio’s bass playing provided a solid and heavily melodic undercurrent. Martin Bird is a powerful and precise drummer with the clear ability to inject the energy that this music demands.

These guys are crazy! There was never a dull moment on stage. Unlike many in the fusion genre, they understand how to pace a performance, and interact with and surprise an audience. I’m reminded of something bassist Stanley Clarke said, in reference to “when fusion was fun.” 2Birds Band makes fusion fun. I highly recommend catching them live. They offer music and a performance few can equal.