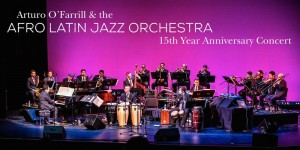 “In May, the Afro Latin Jazz Orchestra travels to what was formerly Mexican territory but is now known as California,” says Arturo O’Farrill. “We go armed with the message that whatever you call that land it is first and foremost planet earth and that whatever you call its inhabitants, they are all immigrant citizens of a nation that was violently taken from its indigenous people by force. We will record at the border wall with guest artists from across the globe delivering a similar message, that physical barriers such as border walls are tiny archaic solutions proposed by tiny minds to a problem that doesn’t exist and has never worked. Fear mongering is a sad and tiny way to govern the United States. Celebrating our freedom, fearlessness and inclusiveness is the birthright of allof the Américas.”