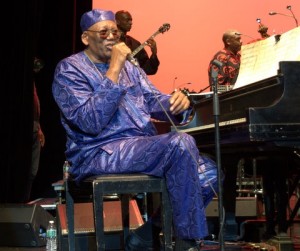 Weston made his first visit to the African continent in 1961, as part of a tour for the U.S. State Department. He visited Lagos, Nigeria on that trip, and returned there under the same auspices two years later. During this time, he released a number of  albums; most notably “Uhuru Africa,” which featured an ensemble of African percussionists, alongside  Clark Terry, Yusef Lateef, Max Roach, Gigi Gryce, Sahib Shihab, Kenny Burrel, Babatunde Olatunji, Tuntemeke Sanga (who narrated monologues by author Langston Hughes), and others. Melba Liston did the arrangements (and also worked with Weston on other albums including Highlife [1963], Tanjah [1973] and The Spirits of Our Ancestors [1991]. Tanjia”was nominated for a Grammy in 1973 for best jazz performance by a big band, and in 1995 for The Splendid Master Gnawa Musicians of Morocco for the best world music album category). In 1967 Weston traveled throughout Africa with a U.S. cultural delegation. The last stop of the tour was Morocco, where he decided to settle. He opened his African Rhythms Club in Tangier for five years, from 1967 to 1972.

Randy Weston: Music is Life Itself from NewMusicBox on Vimeo.

In 1972, while still living in Tangier, he produced the critically acclaimed Blue Moses for the CTI Records. on which he plays electric keyboard. In the summer of 1975, he played at the Tabarka Jazz Festival in Tunisia, North Africa accompanied by his son Azzedin Weston on percussion, sharing the bill with Dizzy Gillespie and other notable artists.

In the late 1980s and early ‘90s, after recording infrequently on smaller record labels, Weston released a series of high-profile and well received recordings for Verve records. Those included tributes to Duke Ellington and Thelonious Monk, Self Portraits, from 1989.

In 1991, Weston recorded a two-CD recording The Spirits of Our Ancestors (which was released 1992), which contained new, expanded versions of many of his well-known pieces and featured an ensemble including African musicians, and guests such as Dewey Redman, Idries Muhammad, Jamil Nasr, Benny Powell, Idrees Suliman, Alex Blake, Azzadin Weston, Dizzy Gillespie and Pharoah Sanders. During this time, he began working with music director / saxophonist Talib Kibwe (a.k.a. T. K. Blue), and continued his collaborations with Liston.

For the remainder of the 90’s, Weston produced a series of solo, trio, and ensemble recordings, and collaborations with the Gnawa musicians of Morocco. In 2001, the National Endowment for the Arts (NEA) bestowed Mr. Weston with its Jazz Masters award, the highest accolade available to a jazz artist in the United States. He was voted into DownBeat magazine’s hall of fame in 2016, a 2011 Guggenheim Fellow, and a 2016 inductee in the DownBeat Critic’s Poll Hall of Fame. He won a Doris Duke Impact Award and received several honorary doctorate degrees. In 2002 he performed with bassist James Lewis for the inauguration of the Bibliotheca Alexandrina in Alexandria, Egypt. During the same year he performed with Gnawa musicians at Canterbury Cathedral at the invitation of the Archbishop of Canterbury. In 2005, Weston played at the Kamigamo Shrine in Japan. On June 21, 2009, he participated in a memorial at the Jazz Gallery in New York for Ghanaian drummer Kofi Ghanaba, whose composition “Love, the Mystery of…” Weston has used as his theme for over 40 years.

In 2013, Weston’s album The Roots of the Blues (a duo session with tenor saxophonist and MFM board member Billy Harper) was released on Sunnyside Records. On November 17, 2014, Weston played a duo concert with Harper at the Queen Elizabeth Hall as part of the London Jazz Festival, In 2015 Weston was artist-in-residence at The New School in New York, participating in a lecture series, performing, and mentoring students.

Weston celebrated his 90th birthday in 2016 with a concert at Carnegie Hall. He continued to tour and speak internationally, performed at the Gnawa Festival in Morocco in April 2016, the Spoleto Festival in Charleston, SC, on June 2, and the 50th Montreux Jazz Festival. In July 2016 he was a keynote speaker at the 32nd World Conference of the International Society for Music Education in Glasgow. The same year, his personal trove of musical scores, correspondence, recordings and other materials were acquired by Harvard Library, in collaboration with the Jazz Research Initiative at the Hutchins Center for African and African American Research.

Weston performed “An African Nubian Suite” at the Institute of African American Affairs of New York University on April 8, 2012, Easter Sunday. A recording of the concert was released in 2017. The performance featured Cecil Bridgewater, Robert Trowers, Howard Johnson, T. K. Blue, Billy Harper, Alex Blake, Lewis Nash, Candido, Ayodele Maakheru, Lhoussine Bouhamidy, Saliou Souso, Martin Kwaku Obeng, Min Xiao-Fen, Tanpani Demda Cissoko, Neil Clarke and Ayanda Clarke, and the late poet Jayne Cortez. “The African Nubian Suite” uses music to trace the history of the human race, and stresses the unity of all humankind. Robin D.G. Kelley wrote in the program notes,”In one single work, Weston manages to pay tribute to the ancient tombs of Sidi Bilal in Aswan, the Sufi tradition, the holy city of Touba in Senegal, China’s great Shang dynasty, African folk music, the timeless history of the blues, and the unity of humankind.” Weston dialogues with each participant in notes and tones, and emcees from the piano bench, revealing exhaustive knowledge of how the traditions intersect…. There are no superior or inferior races, no hierarchies of culture, no barbarians at the gate. Instead, Africa—its music, land, people, spirituality—tie us all together as a planet.”

Weston’s last public concert was in July at the Nice Jazz Festival in France, with his African Rhythms Quintet. At the time of his death, he had performances scheduled through October 2018.

Randy Weston died at his home in Brooklyn on the morning of September 1, 2018. Along with his wife Fatoumata (whom he met in Paris in 1996), Weston is survived by three of his four children, Cheryl, Pamela and Kim; seven grandchildren; six great grandchildren; and one great-great grandchild. As of this writing, the exact cause has not yet been determined.

Throughout his career, Weston was steadfast in realizing his vision and epiphany: the foundational essence and living expression of jazz is an extension of African music. He shared this in eloquent conversation and in powerful musical works. Weston’s friend, Sudanese bassist / oudist Ahmad Abdul-Malik had introduced Weston to the quarter tones and micro tones  inherent in African and Middle Eastern music. He inexorably drew a parallel between this and the music of Thelonious Monk. Weston envisioned an unbroken musical lineage from ancient Africa to our modern times, and demonstrated a powerful connection between Africa and America.

I cannot write this article without sharing some personal experiences. I had the immense honor of spending time with Randy Weston on a number of occasions. His imposing physical stature (he stood 6’8”) was offset by an engaging and open personality that immediately put you at ease. I had many wonderful conversations with him; from interviews I conducted with him while researching my (as yet unpublished) book on the relation between music and Islamic spirituality and culture, to him introducing me to Min Xiao-Fen, Talib Kibwe, and Benny Powell, and attending his performances. I cherish these times as among the most valuable experiences of my life.

Permit me to close with an amusing anecdote. Some time in the late 90s, I attended one of Weston’s performances at the Iridium Jazz Club in New York City. After the performance, I was invited to hang out with the band. When musicians socialize, the exchange of stories is inevitable. Talib Kibwe shared a story about the late trombonist Benny Powell, who was in Weston’s band at the time. According to Kibwe, Powell had attended a jam session. Two young saxophonists were attempting to “cut” Powell by showing off their chops. Powell is known for playing in a slow, melodic, and unhurried manner. He largely ignored the two upstarts; but finally decided he’d had enough. Without warning, or precedent, he blasted them with an indomitable assault of intricate bebop lines that blew away everything the two had been playing the whole night. They pretended that their reeds had broken, and shrank away from Powell effortlessly putting them in their place and letting them know who the real master was. This story brought a chuckle from everyone. Finally, Weston (in a mock scolding voice that the printed word cannot adequately convey) said “Now Benny, that wasn’t very nice, you shouldn’t have done that!” Everybody howled with laughter. It was truly a “Bright Moment.”

Those of us who met him, those who got to know him, and all who heard his music were blessed to be in the presence of a musical visionary, and a beautiful spirit. We are truly a privileged generation to have lived in a time when men such as Randy Weston walked among us.