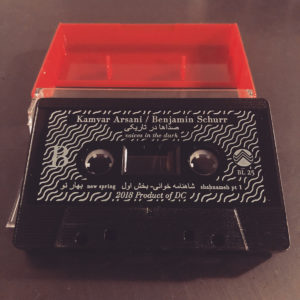 “There are voices in the dark. I hear them. I see them. When soul is pushed to the corner of time, dancing becomes more than a form, becomes a spirit. In the strangest of ways, you lose your fear when you dance with Voices in the Dark.” – Kamyar Arsani

Born and raised in Tehran, Iran, Kamyar Arsani began studying the daf (Persian frame drum) under percussion Master Bijan Kamkar. He also spent a lot of time playing meditative rhythms for Sufi gatherings. In addition to over 20 years performing and researching the daf and its roots, he also studied the kamancheh (Persian string bow instrument) under Masters Ardeshir Kamkar and Sohrab Pournazeri.

In 2015, he produced his first solo album No Freedom. Arsani also plays in two other collaborations. One was Huda & Kamyar, a duo with a Palestinian oud player. Their music makes use of Mashriq rhythms, zaar, sufi dhikr, and other influences. The other was Time is Fire; world/post-punk band (Arsani was the group’s singer and lyricists. The Washington Post described their music as “Music from a country that does not exist.”). Recently, Arsani became a member of Musicians for Musicians, and has performed with SoSaLa.

Now, Arsani realized a new vision with his collaboration with Benjamin Schurr (Blight Records, Br’er, Luna Honey). The cassette and digital release of Voices in the Dark is a respectful and joyous marriage of daf and Avaz (sang in Farsi) with electronic ambiance.

The first track, “All you Pilgrims, Turn Back Around,” begins with a growling, low synth pad that opens the way for Arsani’s daf. It’s clear from the beginning that the rhythms Arsani plays are not the usual imitations one sometimes hears in world fusion offerings. His work is authentic; the complex and subtle rhythmic patterns are firmly rooted in ancient musical traditions. Yet, it works beautifully with Schurr’s electronic backdrop. Arsani’s vocals are startling in their passion and expressive abilities. One need not know the language he’s singing in to realize that his words come from the heart, and are speaking of timeless truths.

“New Spring” invokes a different mood; one anticipates a lighter environment, yet the intensity of Kamyar Arsani’s daf, sometimes gentle, sometimes overwhelming, add an overtone of emotional power. His vocals, sung in a different mode than the opening track, blends well with this mood; yet offers melodic contours that are entirely unexpected. It forces the listener (especially one who does not know the language) to feel a multitude of emotions simultaneously, and make them come to terms with each other. 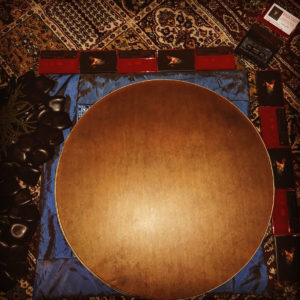 The entire collection is not something that the passive listener can appreciate without an active participation in the act of listening. There are subtle things that come in at unexpected times; such as in “Truth” and “Shahnameh” where Schuur’s electronics slip in and create emotional effects that are almost subliminal. “Ex Spectato,” which is a Fugazi cover and the most iconoclastic track in this offering, greets the listener with a relentless Sufi-punk assault, and dares the listener to respond.

It was inevitable that the Sufi tradition would become a part of the modern music of western civilization. Or perhaps it’s the other way around: the Sufi musical spirit is too powerful to be assimilated. It takes other music into itself and commands its direction. The reason is simple: the Sufi tradition is tied in to universal truths and an immersion into Love as a power and life force as well as an emotion. It cannot be contained in a single genre or culture. Kamyar Arsani music on Voices in the Dark proves this.