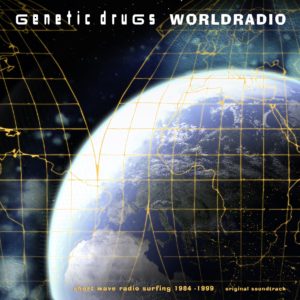 Some time ago, I reviewed Genetic druGs’ release Echoes of Berlin’s Cold War. I described the production as “impressive by any standards; despite its comparatively low tech origins” and the music as “ (immersing) the listener into a culture and historical period that reshaped the course of human history forever.”

The German producer describes his origins thus: “In the early 80s, I began listening to the short wave with unbounded curiosity, tuning into global radio stations, recording random jingles and station IDs and discovering unfathomable voices.” He listened to programs such as Radio Moscow, East Germany’s Radio Berlin International, Radio Cairo, Citizens Band Radio, Radio Beijing, Radio Mogadishu Somalia, Radio Australia, and even the chatter of aircraft pilots. He recorded these, and used them as inspiration and a template for his electronic music production and personal documentation of political events such as glasnost, the fall of the Soviet Union, and the revolutions in the German Democratic Republic and Romania.

The first production of Worldradio was a limited edition released on self-manufactured cassette in 1990. By 1991, Genetic druGs and his band performed Worldradio live as a multimedia event, utilizing three synchronized video tapes in the performance. This was performed in Berlin, Frankfurt, Magdeburg, Rostock, Wroclaw in Poland and festivals in Spain, France and Belgium.

The first track, “Kirvani,” is an instrumental that features Nandkishor Muley. The downtempo vibe of the track draws the listener into a strange mix of chill and an indefinable edge one doesn’t normally find in this genre. This mood is created by the interaction between the beat and a metallophone percussion loop that offers just the right amount of contrast.

The next track, “Andrian Prochorowitsch (Version 1) feat. Yref” begins with a backwards loop of a woman speaking in an East European / Slavonic language. A downtempo beat and bass line emerges in the distant background, while the vocals are mixed and manipulated. I wouldn’t pretend to know what they are saying, but there’s something both sensual and dangerous about what’s going on here.

“Echo Radio” is a sound collage on top of a chill / lounge beat track that serves as the canvas upon which radio samples are painted. One gets the feeling of being in a remote, lonely place where the short wave radio is one’s only companion, and the voices reaching out to the world are similarly lonely people – or perhaps someone with an agenda.

“Somewhere in Egypt” is a short, dark, menacing wash of synth pads that barely cover the sound of Muslim radio programming.

Other tracks stand out in their own way. “Danse Macabre” is a dark journey into a nightmare that one cannot wake from. “Can You Sing Chinese?” and the brief “Free Romania” evoke a strange communist parody of happiness. The title track “Worldradio,” actually has something of a song structure to it, and could be placed among radio-friendly music of the EDM / downtempo / lounge genres while retaining its own unique style. “Andrian Prochorowitsch (Trombone Version)” is, like Version 1, sexy and dangerous. But while Version 1 is like a woman luring you into bed, Trombone Version is like being in bed with her, and she’s giving you the time of your life. But at any moment she may pull a knife on you, and use it.

As one navigates this fascinating archive of music which frames the samples of radio from all over the world, one finds the emotional content of the end of the Soviet era and the world it was in. The tracks evoke the visceral experience of that time. Yet it is presented in a musical mode easily accessible to modern musical sensibilities. Most of the tracks are surprisingly accessible; not as shocking and “out” as most experimental music. Genetic druGs succeeded in imposing an alchemical transformation of both the sounds and the listener to reproduce the raw, emotional zeitgeist of that place and time. This musical time machine gives the listener a unique glimpse into a period of history that historical record, including video, cannot give, and makes it new and very personal.