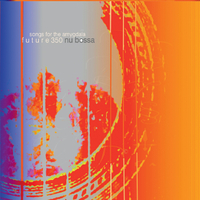 The amygdale is one of two almond-shaped clusters of nuclei located deep and medially within the temporal lobes of the brain in complex vertebrates, including humans. As part of the limbic system, it performs a primary role in the processing of memory, decision-making and emotional responses.

With this in mind, one asks what kind of music could be on this CD Songs for the Amygdala. Self-described as “A Nu Bossa Nova movement, Alternative mood, Intellectual and World fusion. The warmth of traditional and contemporary instruments imbued into a hybrid NU Bossa. Original songs of lyrical poignancy honoring the inspired and courageous.”

Future350 NU Bossa band leader Stephen Richard Johnson, was once signed to Polydor Records with the new wave band The Victorian Parents. A native of Staffordshire England, he lived in New York City for 18 years and County Cork, Ireland for 2 years, and now resides in Kingston NY. Johnson developed a hybrid of Irish/ Brazilian music on his first solo album Crystalline (2008). Johnson is also a member of Musicians For Musicians (MFM). 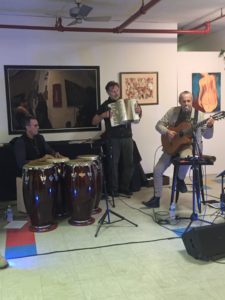 An almost (but not quite) disjointed loop sets up the seductive Bossa guitar of “Helium.” There is an inescapable Jobim mood to the piece which Future350 evokes with subtle skill.

“Cruel and the Kind” explores another facet of Bossa. Its inventive chord changes and politically charged lyrics form an interesting interplay. An unexpected, yet very smooth shift to a lively 6/8 in the bridge offers a slick contrast to the Bossa structure.

The Bossa form is taken into another direction with “Rice and Gold.” This piece, while not musically aggressive, eloquently speaks its internal simmering displeasure with the way people treat the world, and each other.

“Salvatore” is a delicate 6/8 that forms a watery backdrop with Johnson’s social commentary, and underlying hopefulness, in the foreground.

The lyric of “Sympatico” deviate from the political mood of the previous tracks, and delves into an almost metaphysical introspection. Subtle instrumental interjections underscore the conceptual mood of the song.

“Love and Toil” returns to the social commentary of the earlier tracks. Yet the Bossa form manifests itself here as rock. One can easily imagine a talented and imaginative dance company choreographing a performance to this.

The remainder of the CD brings out new and ever changing flavors, colors, textures, and possibilities within the Bossa paradigm; all propelling Johnson’s thought provoking lyrics. The final track, “Companero,” is the most musically adventurous of the collection, blending a rock edge and spoken word with an almost experimental touch to the instrumentation.

Songs for the Amygdala is soothing and stimulating, tranquilizing and challenging. The amydgala of the listener is taken out for a night of dancing and intense conversation.