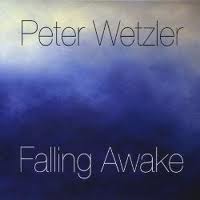 When I was asked to write a review of Peter Wetzler’s 2009 CD Falling Awake, I was expecting (for reasons I can’t explain) a classical pianist whose CD contained the usual standards of the genre, and one or two pieces by a living composer. My assumption was wrong, and pleasantly so.

A dual citizen of the US & Canada, now living in Kingston, NY, Wetzler’s resume is as impressive as it is varied. He studied at Yale, Princeton University, The Mozarteum, Conservatory in Salzburg, Brown University, UC Santa Cruz,. and 20 years of classical/jazz piano study with Kirk Nurock and Robert Helps. He also held teaching appointments at Princeton, NYU, Connecticut College, Juilliard, the School for Visual Arts, and The Center for Creative Imaging. His list of accomplishments as an instrumentalist and composer, as well as his awards and accomplishments as a writer are so extensive it would fill several paragraphs. He also plays accordion; and is a member of Stephen Johnson‘s Future350 Nu Bossa band, performing on their latest CD Songs for the Amygdala. I invite the reader to examine his website for details.

Wetzler joined MFM this month, because he found in MFM a partner to fight for musician rights: “There are so many issues to tackle on the road to reclaiming respect for the livelihood of musicians and artists.”

So, after skimming through YouTube videos of film and dance performances that featured Wetzler’s music, I was ready to dive in to Falling Awake.

The CD begins with “Improv 1.” The listener is immediately greeted by, as Shakespeare would have described it, a “concord of sweet sounds.” The piece moves as flowing water through its changes and gentle harmonies. Yet it never degenerates into the kind of musical pabulum one sometimes comes across in similar attempts. Wetzler immediately establishes himself as an inventive musician; the gentle piano textures are presented without pretense or recourse to the usual harmonic tricks some musicians use.

The title piece, “Falling Awake,” begins with a rolling wave of arpeggios almost reminiscent of Ravel, but coming from a different place. The melody rises above the chords, and reveals an almost Persian flavor that flirtatiously dances in and around the chords. Upon returning to its beginning, it compresses itself into the chordal structure, and emerges in another permeation of itself.

“Claude and Aaron” is clearly a tribute to Debussy and Copeland. Here, Wetzler absorbs the musical styles and processes, and brings it out in a beautiful tribute to the two composers.

“Late Autumn Dusk” is as colorful and inviting as the season its title describes. There is something almost onomatopoeic about Wetzler’s choice of harmonic and melodic development. It very effectively invokes the visceral impressions of late autumn; and bears witness to Wetzler’s talent in creating whatever mood is needed.

The collection runs a wide spectrum of musical possibilities within the paradigm of solo piano. Some of the standouts (or at least among my favorites) include “Pianoforte,” an exploration in prepared piano, “Bali Dreams,” which extends the harmonic structure of an implied pentatonic foundation, the dark, contemplative mood of “Wistful Thinking,” and the colors of “If Only.”

These short (none of the tracks is significantly longer than three minutes) pieces carry within them a depth and subtlety that the attentive and sensitive listener will not fail to notice and be moved by. I am reminded of the work of the great W. A. Mathieu. Wetzler has crafted a truly beautiful collection of piano works. This is more than mere musical wallpaper – treating it as such would do it an injustice. The music does not shout, and never demands that you understand its inner complexities. You will find no startling dramatics here. It speaks softly, and expects you to listen with an open mind. One must immerse oneself in this music to truly appreciate it.