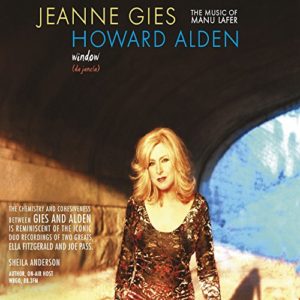 Manu Lafer is an interesting man. A prolific and accomplished musician and composer with over 300 songs to his catalog, and a discography of over 15 CDs, he studied guitar with Luiz Tatit, Cezar Mendes Nogueira, and Ítalo Perón; and studied singing with Ná Ozzetti, Fernanda Gianesella and Wagner Barbosa. In addition to his extensive experience as a producer, arranger, and composer, Lafer also studied medicine at Escola Paulista de Medicina in at São Paulo. He earned a doctorate in pediatrics, and has worked as a visiting researcher at Columbia University in New York and with the Food and Drug Administration in Maryland.

With Lafer’s Brazilian jazz compositions as an inspiration and musical template, vocalist and MFM member Jeanne Gies, and guitarist Howard Alden set out to interpret Lafer’s music. The result is amazing.

Alden began playing guitar at age ten, inspired by Louis Armstrong, Count Basie, Barney Kessel, Charlie Christian, Django Reinhardt and George Van Eps. He performed with Joe Bushkin, Ruby Braff, Joe Williams, Warren Vache, and Woody Herman, and has been a Concord Jazz recording artist since the late ’80s. He also performed on the soundtrack to the 1999 Woody Allen movie Sweet and Lowdown (starring Sean Penn) and also coached Penn on playing the guitar for his role in the film. He concentrates on the 7 string guitar. The addition of the low B string gives the instrument a rich harmonic spectrum which Adlen makes use of in an impressive manner.

From the opening track, “Journey,” it’s clear that Gies and Alden have a special chemistry. On this Brazilian jazz piece, Gies and Alden establish as firmly as possible that this is that special branch of jazz that draws you into a peaceful and lush world. Alden also plays tenor banjo on this song (obviously overdubbed – but we can overlook this brief deviation from the orthodoxy of Gies’ silky smooth and flawlessly executed vocal performance continues its musical peregrination on “Soul Tree.” Her interaction with Alden’s inventive harmonic concept produces some astonishing moments.

“Gypsy” affords Alden the opportunity to nod in respect and admiration to the great Django Reinhardt. His guitar invokes the classical era of Gypsy Jazz, and brings it into a modern jazz context. Gies responds to this, assuming the role of playful, and almost flirtatious chanteuse. The overall effect is truly delightful.

The mood of the previous song is transformed into an almost (but not quite) Noir quality in the next track “Crime.” Gies becomes more of a storyteller on this song, with Alden providing a backdrop. His solo brings out an interesting compliment to the implied darkness of the song.

Gies and Alden continue to explore the musical possibilities of Lafer’s songs, and the complex interaction between their own musical personalities. I won’t spoil any surprises that may await you in the remainder of the music. You will want to experience it yourself.

The jazz world has no shortage of vocal / guitar duos; and few realize that this reduction of instrumentation places not less but more demands upon the performers. The full essence of the music is distilled into a form of almost frightening intimacy, and few can stand up to this intensity of musical scrutiny. With Gies and Alden, it’s impossible not to recall the same unity of musical vision shared between Ella Fitzgerald and Joe Pass. Yet, this is not an imitation of what’s already been perfected; they have their own musical story to tell. Like the aforementioned legends, they know how to bring out the finest and most expressive nuances of their respective instruments. Gies and Alden stand apart from the crowd as true artists and true purveyors of the requisite beauty this music demands.