The inaugural three-day long Thrill festival of Belgian and Scottish jazz, opened on this winter night with an uplifting evening entitled “Beyond Django”. 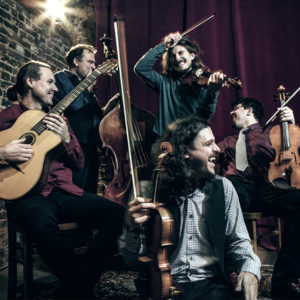 Having several years ago experienced Limberger play Magyar Nota – style in his Budapest Gypsy Orchestra, this reviewer remains in awe of his superb and ever deepening command of violin – which as he plays does truly seem like an extension of him.

Inclusive of the encore, LVDB quintet partied through ten tracks, the charming Limberger introducing most, as well as singing in English and “(his) own gypsy language”. His strong, rough timbre vocals sat well over the sheen of string pyrotechnics. Old favourites were aired, such as ‘Ole Miss Blues’, ‘Avalon’, ‘It’s a Sin to Tell a Lie’ and a notably lovely piece by Limberger’s relative, guitarist Fapi Lafertin. A Venezuelan-style piece in 5/8 composed by band guitarist d’Ardenne, and a wonderful, peripatetic piece by Limberger (referencing the music of Argentina, Hungary and Romania), fitted seamlessly into the programme.

Throughout a sleek set the band made technical complexity played at breakneck speed look easy and enormous fun, whilst also reminding us that jazz is nearly always enhanced by gorgeous melody. 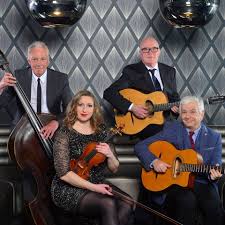 The second set of the concert was from 2018 Scottish Jazz Band of the Year, Rose Room, whose focus on 30s and 40s Rive Gauche, Paris married well with LVDB, and who likewise carried their skills lightly and with great cheer. Warmly received Seonaid (pronounced Sho-na) Aitken on violin and vocals (in English and French) introduced a 12-part programme of more old favourites such as ‘Indeed I Do’ and ‘Dark Eyes’, together with some band-composed pieces such as rhythm guitar player Tam Gallagher’s ‘Chas’ and Dave-style ‘Undecided’, and guitarist Tom Watson’s delightful ‘La Petite Valse’. Double bass player Jimmy Moon provided solid and animated back up.

Judging by the grins on the faces of the audience, it was clear that Thrill was indeed proving to be yes, quite a thrill. It seems important that, notwithstanding the long shadows cast by Brexit, cross-border sharing of joyful jazz such as tonight’s, will be able to continue.