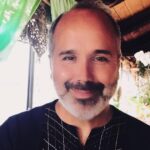 Guitarist Richard Miller has performed extensively throughout the United States and Latin America in concerts that explore his roots in Brazilian choro, American Jazz, and classical guitar. He has a Ph.D. in music theory from Catholic University of America and a Masters in guitar performance from Manhattan School of Music. He taught music theory and ear training at Columbia University for eight years and has just relocated to Southern California. Lambert Academic Publishing recently published his book The Guitar in the Brazilian Choro.

Stephen Johnson was born in the UK, and presently lives in New

York. He is a singer, songwriter, guitarist, percussionist, composer, music activist and music coach. His music has been released by Polydor Records and Independent Records. He is also the bandleader of Victorian Parents, Son Of John, Island of Men and currently Future350 Nu Bossa.

The meeting began with Richard and Steven introducing themselves. It was clear that the webinar would be very much guitar-based. Richard began with a description of the history of Brazilian rhythms. The first thing that he focused on was the fundamentals of African rhythm from which Brazilian music emerged. He went into considerable detail about how the rhythmic foundations of Brazilian music and dance work. He demonstrated how African rhythms are based on complex interlocking rhythmic patterns.

His discourse on the history of Brazilian music was revelatory. One fact I was not aware of, and didn’t expect, was how, in the 1800s, polka music was mixed into traditional Brazilian music. The resulting music was summarily forbidden by the Catholic Church.

Throughout the 20th century Brazilian music evolved into the samba, bossa nova, Choro, and other forms.

After a fascinating and very detailed exploration of Brazilian rhythms, Richard handed things over to Steven. He spoke about the beginnings of bossa nova culture; mentioning the works of Joao Gilberto, Stan Getz, Sergio Mendes, etc.

The culture that grew out of it concentrated on the development of this music and attracted both the audience and the influence of jazz. His presentation focused more on how culture evolved out of the music. He also mentioned years during which Brazil was under a totalitarian dictatorship, and culture were suppressed.

At one point Steven picked up a guitar and played something in a Brazilian 6/8 rhythm and asked Richards analysis (jokingly claiming “I don’t know what I’m doing”). Richard broke down the rhythm and offered his opinions and views about it.

Stephan asked about the opinions about interpreting rhythms. This opened up a big discussion where cross cultural discourse was kicked around and explored from a variety of perspectives.

Richard said something interesting. He said that imitators never achieve anything but when one immerses oneself in the traditional, one’s natural voice will inevitably emerge.

Richard also mentioned a neglected aspect of this music: the lyrics. Some songwriters actually put hidden meanings into their lyrics.

Sohrab Saadat Ladjevardi MFM’s president, who had remained quiet most of the time, asked about the musicians community in Brazil. The fact is that Brazilian musicians have been organized for many years. Some of this organization has had religious connotations. It’s also interesting to note that for a long time, it was necessary to have the musicians license card to perform in Brazil. This had carried political connotations, as it had in the US..

The webinar ended on a cheerful note.

Richard and Stephan gave an utterly fascinating and truly educational presentation. It sets a good precedent for more fascinating webinars that MFM can present.