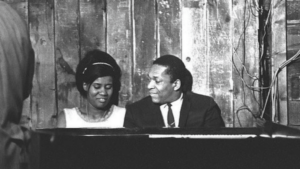 In January 1966, Alice Coltrane replaced McCoy Tyner as pianist with John Coltrane’s group. While she was not equal in technical proficiency to Tyner, she brought a new approach to the music which coincided with their growing interest in spirituality. She continued playing and recording with the band until John succumbed to liver cancer and died on July 17, 1967.

After her husband’s death (and taking a vow of celibacy), she continued to pursue the musical and spiritual vision of her late husband. This was evident in her first album, A Monastic Trio, recorded in 1967. Between 1968 and 1977, she released thirteen albums. Works such as Ptah, the El Daoud and Journey in Satchidananda showcased her ability to reconcile blues and jazz elements with eastern influences. Her musical direction progressed from a four-piece group to a more orchestral approach. She employed string arrangements, her use of the Wurlitzer organ, and her innovative use of the harp. Her album Universal Consciousness featured her on organ, and string arrangements by Ornette Coleman. In 1973, she left Impulse! Records, and released her subsequent albums on Warner Bros. Records. Coltrane also collaborated and performed with Kenny Clarke, Kenny Burrell, Ornette Coleman, Pharaoh Sanders, Charlie Haden, Roy Haynes, Jack DeJonette, and Carlos Santana.

After her husband’s death, she suffered from severe weight loss, insomnia, and hallucinations. This led her to seek spiritual guidance from the Hindu gurus Swami Satchidananda and Sathya Sai Baba. In 1972, she abandoned secular life. She founded the Vedantic Center in 1975, and changed her name to Turiyasangitananda. She became the spiritual director (swamini) of Shanti Anantam Ashram in Malibu, California. During this time, Coltrane’s music concentrated on devotional Vedic solo chants, known as bhajans, and group chants, and kirtans. She composed original melodies based on the traditional chants, and made innovations using synthesizers and sophisticated compositions. In 1982, she released a cassette titled Turiya Sings, which was available only to the members of the ashram, through her publishing company, the Avatar Book Institute. She later released three more cassettes, Divine Songs (1987), Infinite Chants (1990), and Glorious Chants (1995).

In 2004 Coltrane released her comeback album Translinear Light (produced by her son Ravi). In 2006, After a 25-year hiatus from major public performances, she returned to public performance. Noteworthy performances included a concert at Ann Arbor’s Hill Auditorium presented by University Musical Society of the University of Michigan on September 23rd, celebrating what would have been John Coltrane’s 80th birthday, the November 4th concert for the San Francisco Jazz Festival with her son Ravi, drummer Roy Haynes, and bassist Charlie Haden, and her performance at Town Hall in New York City sharing the bill with Ravi Shankar (it would also be the first time Ravi Coltrane met his namesake).

On January 12th, 2007, at the age of 69, Alice Coltrane died of respiratory failure at West Hills Hospital and Medical Center in Los Angeles. She left behind a monumental musical catalog, was a model of exemplary music professionalism (she managed John Coltrane’s estate, his music-publishing company, Jowcol Music, and the John Coltrane Foundation, which has given out scholarships to music students since 2001). and the infusion of an authentic spirituality in music.