From the fall of 1969 until it closed in June of 1971, I attended nearly 20 shows at the Fillmore East. It was located at the corner of 2nd Ave & 4th St, right around the corner from the first location of DMG on East 5th St (1991-2003). It was my favorite rock music performance venue ever and I’ve been to hundreds of others (places & gigs) since. There were usually three bands starting at 8pm (and later at 11pm) and the ticket prices were $5 (orchestra), $4 (mezzanine) & $3 (upper mezz)!

If you want to see a list of who played there, check this out: http://www.fillmore-east.com/showlist.html. I caught the Flo & Eddie (Turtles singers) version of The Mothers twice at the Fillmore. If you’ve heard & laughed at those Mothers LP’s – ‘Live at the Fillmore’ & ‘Just Another Band from L.A.’, then you know what was going on with that comedy band. 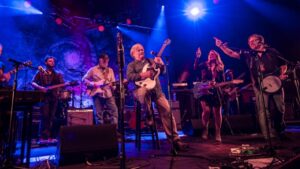 Opening for the Mothers in June of 1971 was a band called the Hampton Grease Band from Atlanta, GA. Nope, I had never heard of them either. Their set started off with a pudgy guy in a suit standing stiffly at the mic, the band had two guitars, piano, bass & drums. There looked like there was someone’s grandmother sitting in a wheelchair on the side of the stage knitting for the entire set. The singer/frontman was someone named Bruce Hampton (later known as Colonel Bruce Hampton) and he had a strange voice & on-stage presence.

After every song he took another piece of his suit, acting weirder as the set progressed and by the end he was in his underwear and ran around the stage like a crazy man. I took my young sister and we were both flabbergasted by that set! They opened their set with the above song, “Halifax”, so read those words and you will see what I mean. Rumor has it that when the band was in the studio recording this song, Hampton found a pamphlet from the chamber of commerce in Halifax (Canada) and read the words from the pamphlet. The song is very long and the middle section has some astonishing double guitar playing by Glenn Phillips & Harold Kelling.

The band ended up getting two encores, something nearly impossible for any opening band. Mr. Phillips is still with us & playing, check him out, he is still an incredible guitarist! I caught him once at CBGB’s in a trio and later at Tonic with Henry Kaiser & Elliott Sharp. Word is that their one & only album, Music to Eat, is the second worst selling album on Columbia Records. It figures! It remains a personnel favorite to me and many other Weird Music Freaks around the world.

Colonel Bruce Hampton went on to have a long solo career and worked in a few other great bands like the Aquarium Rescue Unit (with Jimmy Herring, Oteil Burbridge & Jeff Sipes), the Fiji Mariners & Code-Talkers. I caught Hampton & the Aquarium Rescue Unit at Wetlands & at the Ritz with the reunited (Dixie) Dregs (yuck!), both ARU sets were incredible, best fusion band of the 90’s!

Bruce Hampton’s longtime goal was to die on stage still performing and you know what? He did just that on May 1st, 2017, after just finishing a performance. All hats & headbands off to Bruce Hampton, a true American original!