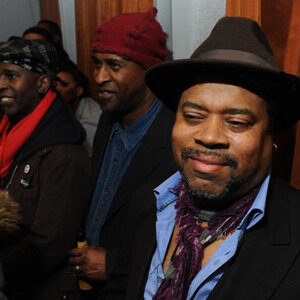 Tate was one of the most unique and influential individuals in the New York Music scene. As a brilliant guitarist, leader of Burnt Sugar (a.k.a. Burnt Sugar the Arkestra Chamber, where he employed Butch Morris’ process of “conduction” – a method of conducted improvisation), he synthesized the entire spectrum of African American rock music. His music had a quality that held the suggestion of a man who did music out of love, and who was a man of peace who could be a formidable warrior when necessary.

He proved a formidable warrior in 1985, when, along with guitarist Vernon Reid, Dk Dyson, and Konda Mason founded the Black Rock Coalition. The BRC stood up against the institutional (and never acknowledged) racism in the music business.

It didn’t stop there. As a writer, music critic, and journalist, he was to be named “Godfather of Hip-Hop Journalism.” And we must not forget his books; Flyboy in the Buttermilk : Essays on Contemporary America, Everything but the Burden; What White People are Taking from Black Culture, Midnight Lightning: Jimi Hendrix and the Black Experience, and Flyboy 2. Tate articulated the inner essence of the African American spirit as eloquently as James Baldwin and Langston Hughes. He turned music journalism into an art form.

I must share a personal thought. I did not know Tate well, and only met him a handful of times (mostly at Burnt Sugar performances). But his persona was clearly that of an extraordinary man with a unique vision. His music and writing more than substantiated that impression. Going through the posts on social media, it’s clear he touched the lives of many people in a deeply personal and significant way.

Those who know me know I’m a big Jimi Hendrix fan. Naturally I read Midnight Lightning. I was awestruck by how Tate brilliantly articulated an aspect of Hendrix life, career, influence, and essence that nobody did before him Tate’s book stands out as a unique contribution to the body of Hendrix literature.

Permit me to add the following anecdote from MFM president Sohrab Saadat Ladjevardi:

“Greg Tate and I were not very close, but we cared for and liked each other.

“When I came to NY in 2008, he was one of the rare musicians and band leaders who, without knowing me, invited me to perform with his Arkestra in a club in Harlem. It was an honor to play with the Arkestra.

“Music brought us together. Our love for music and the people who make music guided our music activism. We both believed that music was a cultural-social-political power. And we both cared for musician’s rights and for our peer’s well being.

“He agreed that organizing is the only way for musicians to get out of the dark tunnel. He cared for MFM, and I cared for the Black Rock Coalition. MFM and BRC became allies in fighting racism. Thankfully, he and his Arkestra members participated in MFM’s #MakingMusicIsAProfession campaign a couple of years ago.

“On many occasions, Dr. Cornel West said that compassion and humanity are missing in people’s lives here. NOW is the time for professional musicians regardless of their race, gender, religion, social status and popularity to become a positive and influential force in this country.

“It’s a shame to lose brother Greg at this crucial time with COVID around us which is endangering all musicians’ livelihoods. With Greg’s passing, the BRC and the entire African American music community, as well as MFM and myself, lost an important voice and force to make America a better country. We lost a great musician and author / journalist. And we lost a friend.

Musicians For Musicians salutes the memory and legacy of Greg Tate. Our heartfelt thanks for his many valuable and beautiful contributions to the world of music and literature, to our organization, and to our lives. We humbly offer our condolences to his family and friends, and to MFM’s friends and allies in the Black Rock Coalition.