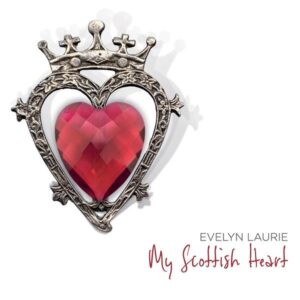 Paisley, the Scottish town that is famous for its textiles and ‘Paisley pattern’ has over the years produced more than its fair share of creatives, from weaver poet Robert Tannahill, to folk popstar Kenneth McKellar and artist John Byrne. From this rich cultural background Paisley buddy Evelyn Laurie released her debut album A Little Bit of Me in 2018 to a very positive reception, and it is likely her charming follow-up album My Scottish Heart will be similarly popular.

A life-long singer across various musical genres, in the new album Evelyn Laurie shares some of her favorite Scottish folk ballads. Her band this time, slightly altered from the 2018 line-up, consists of some of the cream of Scottish jazz and folk (and are listed at the end of this article).
Laurie’s pianist Euan Stevenson is already making waves currently in the UK with his arrangements and pianism with the likes of jazz vocalist Georgia Cécile and in very fine sax-piano jazz duo New Focus. In My Scottish Heart he not only anchors the songs beautifully with his delicate, sympathetic playing, but he also takes credits as musical director, co-arranger (with Laurie), and co-producer with Laurie and Solas Studio’s wunder-engineer, Gus Stirrat.

Stevenson’s jazz and classical sensibilities add significantly to the album’s success.
Ten songs in all, eight are 18th and 19th century Scottish folk. The remaining two, slightly more up-tempo ones, ‘Woo Me Again’ and ‘My Scottish Heart’, with lyrics credited to Laurie and music to Laurie and Stevenson, fit in perfectly with the much older songs. Lurie’s helpful liner notes explain a little of the story behind each ballad. Other than the final ‘Auld Lang Syne’, here sung to the less familiar yet lovely original tune, and in which Laurie occasionally slightly struggles with the very lowest register notes, her voice is delightful: clear, with a fresh, youthful quality and her diction perfect.

Opening tune, early 19th century ‘I Know Where I’m Going’ is pleasantly jaunty, the lyrics introducing the theme of disappointment in love which continues in the ‘Loch Tay Boat Song’ with its smattering of Gaelic. ‘Island Spinning Song’ introduces Gaelic nonsense words such as “hullamackadoo”, and is the first time this listener has heard this tune played with a distinctly jazz feel, from the start the delicious trumpet from Colin Steele adding to the successful folk-jazz fusion.

The remaining two songs, ‘Eriskay Love Lilt’ and ‘Fly We To Some Desert Isle’ further demonstrate that a seamless joining of Scottish folk song and jazz has been achieved, whilst at the same time proving that the quality folk songs of our ancestors can feel entirely relevant today. My Scottish Heart is most definitely yet another feather in Paisley’s cultural cap.

Fiona Mactaggart lives in Edinburgh and writes about music on Scottishjazzspace.co.uk