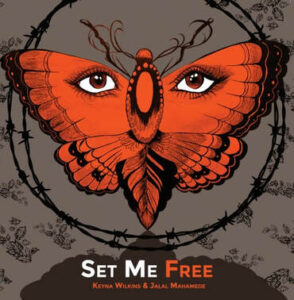 Thus begins the beautiful and sobering album Set Me Free, the core of which are poems written and spoken by poet-artist Jalal Mahamede, a young Ahwazi Arab refugee who has been held in detention by the Australian government for over nine years.

First on the notorious Nauru Island, then on Christmas Island and finally in a Brisbane detention centre – where he was transferred due to ill-health – Mahamede expressed his experiences and especially feelings in his poetry as well as in some candid drawings, both of which give an unscreened sense of what he has suffered. Themes are of injustice, incarceration and freedom. Sounding as though he is effortfully toiling through mud in order to share with us his painful story, Mahamede elicits huge sympathy and respect, as well as shock that a government should choose to treat anyone in this manner.

Given these circumstances the album is a collaborative effort. Sydney-based Australian-English composer-improvisor-flautist-pianist Keyna Wilkins initiated, curated and played on this album, together with 19 friends and family members after she and Mahamede had met on an online forum. Trialling her improvisations along to his poetry readings, they discovered an immediate synergy.

For this album Mahamede was recorded reading his poetry in his cell via Zoom and due to this happening during an Australian Covid lockdown, all the musicians were recorded in their own homes, their isolation a benign echo of Mahamede’s. A shout-out should go to sound engineer Matt Stewart, who has done a sterling job given the unusual recording circumstances.

There are 12 poems/tracks, with variable numbers of musicians including Wilkins on each one. The styles and instrumentation differ widely, although a constant is a respect for the words, the music consistently weaving a meditative containment around them. Indeed, always sensitive and responsive to the texts, the musical improvisations make it more possible for us to really listen to the anguish-laden words.

Opening poem ‘I Love My Tears As Much As My Laughter’ with its repetitive key phrases, is given strong support by Wilkins’ flute and Shane Carpini’s drums, while the following, title track is a starker affair with only Wilkins’ piano accompanying Mahamede’s painful and beautiful words.

‘Chains’ includes a lovely interlude of Wilkins’ piano and virtuoso Gumaroy Newman’s didgeridoo while another standout poem/track ‘When I Hug You’ has some striking electric viola da gamba (Jenny Eriksson) and trumpet (Will Gilbert then Elliot Lombard).

The interestingly wide range of instrumentation is further evidenced in ‘Doomed To Life’, with some dramatic viola from Carl St Jacques and effected vocalisations from Josh Shipton, while cello (Karen Cortez) and beatbox (Connor Malanos) provide echoey support to Mahamede’s powerful poem ‘Drop of Rain’.

An accompanying book of Mahamede’s illustrated poetry, My Tears Will Calm The Sun, will be published this year by Tangerine Books. Reading these poems (which are also in the CD insert) without the comfort of accompanying music is difficult but can be done.

This is an important story to tell, for whilst Mahamede was at last released from detention at the end of 2021 – a fortnight after Set Me Free was released – currently more than 200 other refugees remain in detention in not dissimilar conditions, in Australia or offshore.

All profits from the sale of Set Me Free will go to Jalal Mahamede.

“…partly as these illegal detainees in Australia deserve any support they can get, I believe anyway.” – Fiona Mactaggart lives in Edinburgh and writes about music on Scottishjazzspace.co.uk