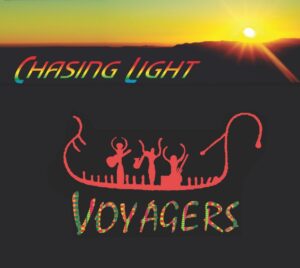 MFM members are familiar with our brother Banning Eyre. (In July 2021, Eyre was the guest on an MFM webinar on bringing African music to the American music scene: https://musiciansformusicians.org/2021/07/report-mfm-zoom-webinar-5-with-banning-eyre/).

If you have not been exposed to his music, you are in for a treat.

Voyagers is a trio consisting of Malian kora maestro Yacouba Sissoko, Austrian saxophonist Edith Lettner, and American guitarist Banning Eyre. They play traditional African music, and original African-themed compositions, interspersed with elements of Jazz. The most unusual thing about their music is that, despite the African roots of there music, there are no drums or percussion.

Well, I had to hear what this!

The opening track was “Today is a New Day.” The jazzy, almost Dixieland beginning was almost deceptive in that it gave no hint to the way the song would unfold. But it soon settled into a very African sound. Eyre and Lettner played marvelously, but Sissoko was the center of the song’s vibe. It was very playful and pretty.

“Soloey” was up next. This had a more serious feel in 6/8. There are vocals on this track, which I’m presuming are from Sissoko. Lettner played an impressive solo on this. Eyre’s solo was very solid without being flashy.

A flourish on Eyre’s guitar opened the third track “Waiting for Spring.” This piece had a gentle and idyllic feel, eloquently evoking the mood of early spring. Eyre and Sissoko’s work on the rhythm parts, underscoring Lettner’s melodies, functioned as one. This, so much so that it was occasionally an effort to tell them apart. The trip extracted all manner of moods from the song’s simple progression of F major and C major.

The rapid arpeggios and glissando of Sissoko’s kora opened “Raise Your Voice.” This song used its minor tonality to evoke a different mood than we’d expected from the previous tracks. Lettner really shined on this one, letting loose with some powerful things. Eyre matched her with some unexpected rhythmic phrasing, and Sissoko’s kora brought out another perspective of the song’s deep emotions.

The title track had some of Lettner’s most outstanding work. She brought some unusual sounds out of the saxophone, sounding more like a dudek or a lower register mizmar.

The entire album is quite beautiful. The interplay between Sissoko and Eyre was flawless. Lettner showed herself to have a very strong sense of melody, and a good understanding of the music. And the lack of percussion in these African music explorations actually upholds the integrity of the music. They never needed to compensate for this in any way the music speaks for itself.

This is an album you want to listen to in a quiet setting. This music demands one’s attention be immersed in its subtleties and beauty. Put it on, sit back, and let it work its magic on you.

Voyager accomplished something truly wonderful. You need to hear this