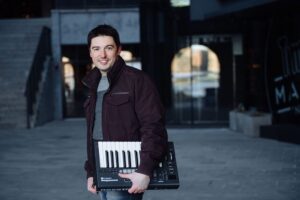 On Friday, July 8th, 2022, MFM presented its tenth Zoom Webinar. The theme was How to Set Up One’s Home Studio. The speakers were two MFM members whose qualifications in this area can only be described as exemplary: Adam Reifsteck  (musician, composer, producer, owner of Teknofonik Records) and Jeffrey Green (musician, composer, Sweetwater sales rep, whom I interviewed for Episode 32 of the MFM Speaks Out podcast https://mfmspeaksout.simplecast.com/episodes/jeffreygreen-83cmut5o). Reifsteck also hosted the event. 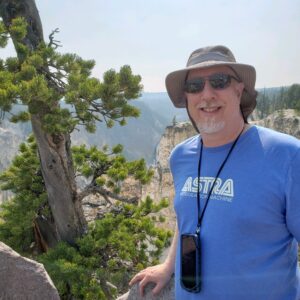 After an introduction, Reifsteck turned it over to Green. He began with a brief historical perspective. He then went into the first important question one must ask oneself: what is one’s goal for building a home studio. This is a vital question to answer, as it defines how one will not only build but use the studio. He went on to define the questions of the front and back end (or signal chain) of the studio and how it ties in to the purpose of the studio. Reifsteck elaborated on the basic necessities of what is needed for the effective home studio.

These include space, room acoustics and treatment, headphones, computers (and the endless argument of PC vs. Mac), DAWs, audio interface, software, monitors, microphones, preamps, MIDI controllers / keyboards, and other equipment.

The discussion turned to the question of budget. This is, of course, dependent upon what one wishes to use the studio for. A lot of variables need to be considered. This led to the participants asking Green and Reifsteck a variety of very interesting questions, exchanges of ideas, and the inevitable anecdotes and stories that are shared when musicians congregate.

MFM President Sohrab Saadat Ladjevardi brought up an interesting point. He is an elder musician. Despite being a master saxophonist, he has very limited knowledge of audio and music technology. Nonetheless, he presented the question of how he could build a simple setup to facilitate recording saxophone and vocals; this, for the purpose of expedient recording and sharing of his saxophone work with projects wherein traveling to a studio would not be feasible.

This brought up a lot of very interesting and useful possibilities of how to proceed in this area. Green summed things up for the beginner very well by saying Keep It Simple. Start with a simple set-up that does what you need it to do, and slowly build from there (if you need to). Ultimately it’s just a set of tools; the real creativity is in the hands of those who use the tools.

On a personal note, I am a bit sad my schedule didn’t permit me to attend the webinar. I learned some very useful things form the two masters who spoke. And when I listened to the webinar days later, my mind was filled with things I would have liked to have asked and contributed.

All in all, this was a very good and successful webinar. I recommend watching the video on the MFM YouTube channel. There is something for beginners and experts alike.

There is something for beginners and experts alike.