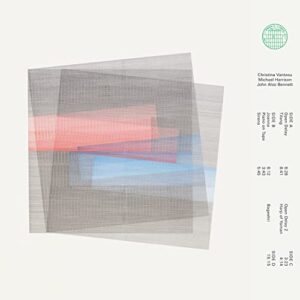 Readers of DBDBD NY and listeners of the MFM Speaks Out podcast will be no stranger to the work of pianist, composer, music educator, and MFM member (and guest for MFM Music is Essential Zoom Talk #2) Michael Harrison. A protégé of LaMonte Young and former student of Pandit Parn Nath, Harrison developed a unique approach to the piano which uses just intonation and compositional methods based on Indian Raga.

Harrison is also presenting a course in Indian Raga running Oct. 5th through Dec 21st in association with Arts, Letters, & Numbers. He is offering MFM members a 25% scholarship for the course. More about it here: http://www.artslettersandnumbers.com/programs/indian-ragas-with-michael-harrison-fall

John Also Bennett is an American composer, synthesist and multi-instrumentalist whose music is described as avant-garde, atmospheric, or minimalist who has a history of organizing and producing underground performances of experimental music. On past recordings he used flutes, microtonal synthesis and field recordings. His compositions for animation and film have been screened at institutions and film festivals around the world. He regularly collaborates with Christina Vantzou, and also collaborated with the likes of Jon Gibson, Pauline Anna Strom, the American Contemporary Music Ensemble (ACME), Jefre-Cantu Ledesma, LEYA, Peter Burr, and Zin Taylor, among many others, and performed at festivals all over the world.

Christina Vantzou is a composer & experimental filmmaker who has built a unique audiovisual language. Vantzou has composed and released four albums of ambient-classical music and has developed a form of graphic musical notation influenced by abstract minimalists. Her many collaborations have included performing with Mark Linkous (Sparklehorse), co-founding The Dead Texan, creating surreal videos/abstract films and performing with ensembles across 4 continents.

This trio of creative minds recorded an album of music from sessions they did in 2019 in Berlin, Germany. It was originally released on a two album set and is available for digital download in WAV, MP3, and FLAC formats for the first time. It is also available as a limited edition 45RPM double LP, with a striking minimalist cover art, accompanied by a risograph printed insert featuring track credits and Harrison’s handwritten tuning charts used on the album. (Interesting how it’s not available on CD. A sign of the times).

“Open Delay,” the album’s first track, begins with Harrison introducing the primordial mood of the piece with a sequence of delicate notes. The sonic and visceral effect of the just intonation tuning is immediately obvious. Bennett’s synthesizer backdrops, along with tape loops by Francesco Donadello (who also recorded and mixed the track), lurk mysteriously in the background. From time to time, a note jumps out of Harrison’s very minimalist piano whose intonation startles and shocks like an unexpected color in a painting. Then it returns to its form.

“Open Delay,” flows seamlessly into “Tilang,” the next track. Harrison evokes the spirit of the raga Tilang upon which it is based with his masterful sensitivity. The harmonies become more and more haunting with the interplay between the piano and synthesizer.

On the third track, “Joanna,” Bennett’s droning synthesizer seems to work its way more to the foreground. Harrison’s piano still dominates the music, but the synthesizer is clearly taking a more active role in the music.

“Piano On Tape” shows Harrison’s astonishing sensitivity and mastery of making the piano do anything he wishes. There are times the piano almost resembles a harp.

Bennett makes his way to the forefront on “Sirens,” with Harrison laying back. The harmonics and textures are not abrupt or startling, but they have a power that grows until one finds oneself immersed in it.

The remainder of the collection has many moments of beauty, such as “Harp of Yaman,” where Harrison’s melodic clusters dance in and around Bennett’s synthesizer, or the infinitely feminine, yet stoic longing of “Bageshri.”

Throughout all this, Vantzou conducts / directs the music in silence. There is a ninja-like quality in her role. She somehow resembles one who annihilates the barriers between Japanese Noh and Buranku Theaters. But she is no mere puppeteer; she is directing living musicians with powerful ideas playing living and powerful music. Each contribution is essential to the organic whole of the music.

This is music that one must take one’s time and immerse oneself in. There is no passive or casual listening here, but one needs to be open to the sublime beauty of what’s being created. It’s easy to banter adjectives like “meditative” or “ethereal.” But this does the music a disservice, because of the often generic and mediocre music that claims those labels. With this collection, one must approach with an openness and surrender in order to experience and appreciate the true beauty.