Jeff Beck…”nobody plays like him. The reason for this is simple: nobody can.”

A Eulogy by Dawoud Kringle 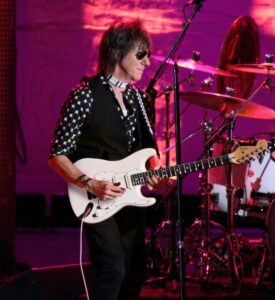 On Wednesday, January 11th, 2023, the music world was shocked when Jeff Beck, one of the greatest electric guitarists to ever walk this earth, succumbed to bacterial meningitis. He was 78.

Sometime in the 80s, I saw Jeff Beck at Madison Square Garden when he was on the same bill with Stevie Ray Vaughn (another great guitarist who we lost much too soon). What a performance! At the end, the two did a duet that tore the roof off the place. I have no words to describe it; you had to have been there.

What can you say about one of the pioneers of rock guitar who never stopped developing? Many older guitarists stay in their lane and do what they always did. Some degrade with age. Not him. His music never became stagnant. His sense of melody was always perfect. You never heard a sloppy or meaningless phrase. Every note had a character and a life to it.

What can you say about one of the handful of men who wrote the book on modern electric guitar playing? From his days in the Yardbirds as Eric Clapton’s successor, to his Blow By Blow period, the Wired period, collaborations with Jan Hammer, Stanley Clarke, Toots and the Maytals, Brian Wilson, Roger Waters, Tina Turner, actor Johnny Depp, and others, more than can be included in this article – Beck always delivered memorable performances.

What can you say about his daredevil improvisational skills? He was absolutely unpredictable, but always brilliant: always in service of the music and never in service of the ego. Guitar players would watch him, and every minute ask themselves “How the hell did he do that?” His use of the volume knob and vibrato bar on the guitar was flawless. He used artificial harmonics in a way that would stand next to the rare greats like Lenny Breau, and at the same time belong only to him. I have a personal theory about his guitar technique.

One of the many things that made him so extraordinary and unique is because he truly understood the acoustic properties of the electric guitar. This is something most guitarists overlook. He was a master’s master at this.

It’s a strange irony that despite being so influential, nobody plays like him. The reason for this is simple: nobody can.

All this from a gracious, vivacious, and supremely confident Englishman with a love for music, guitars, and cars (he loved to work on hotrods). To the end, he was always at the top of his game.

We all know the old saying, “you don’t know what you got until it’s gone.” To be sure, nobody lives forever, and we are blessed to have had him and his music. But such a loss is always a painful reminder of how transient and fragile it all is.

With humility and admiration, DooBeeDoo and MFM salute the memory of Jeff Beck.