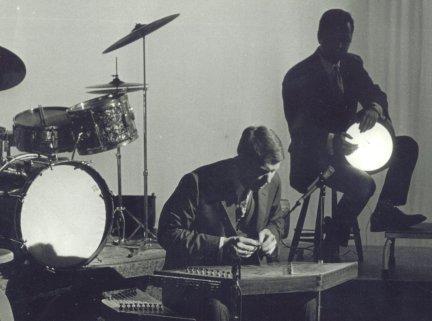 Dr. Miller also known to many Persians as Koroush Ali Khan is one of the first jazz innovators who was interested in Eastern music since the 50’s but did not gain fame because he left the scene in 1959 to travel through the orient and to live in Tehran. Before going on to Europe, Dr. Miller was working on Eastern music and finding ways to bring metaphysical and highly developed Eastern concepts into modal jazz.

While in Europe Miller played with top jazz artists like Don Ellis (where he was inspired by Miller’s Eastern concepts) and Eddie Harris including occasional appearances at the famous Blue Note in Paris where he sat in for Bud Powel to play with Kenny Clark. During his residence in Europe, Miller was prominent in the Stockholm. Frankfurt, Brussels and Paris jazz scenes and played at two major jazz festivals in Belgium.

END_OF_DOCUMENT_TOKEN_TO_BE_REPLACED

New York-based Hassan Hakmoun, one of contemporary Moroccan music’s most notable figures, was born in Marrakesh in 1963. At age seven he began to study tagnawit, the traditional arts, folklore, and rituals of the Gnawa tribes, former slaves originating from the Sudan whose arrival in Morocco was marked by their conversion to Islam.

The Gnawa people act as intermediaries in the spirit world and also as entertainers; Hakmoun initially studied their dances and songs, later graduating to drumming, litanies, and chants. He left school at the age of 14 to travel in the pursuit of other Gnawa masters, eventually ending up in France; upon returning to Marrakesh, Hakmoun’s repertoire continued to grow — later including songs of Arab and Berber descent — and he performed as a m’allem, or master musician of the derdeba, a trance ritual held to placate the spirits. Hassan became a Master of the Santir (a three string,long necked lute).

END_OF_DOCUMENT_TOKEN_TO_BE_REPLACED

This is a solo sitar piece; variations of a theme of a composition of mine called “Will to Power”. The scale it is built upon is a hybrid: D Eb F G# A B C D. The improvisation is intended to convey the struggle against conflicts with, and within, human free will. There are a few motifs that the melody constantly returns to; symbolizing the inexorable pull of one’s individual destiny.

Note: this is NOT a raga, and the rhythm is not at all based on tal. I was experimenting with concepts that are neither East nor West.

END_OF_DOCUMENT_TOKEN_TO_BE_REPLACED

Dear Friends,
Please come out to the first installment of my ‘creative-non-fiction event’ project: “Adoption Story.” This will be part of the tale of my search for my Iranian birth father.

Where: Bar Matchless (directions: corner of Driggs & Manhattan Aves, Greenpoint, Brooklyn. Trains: G train to Nassau, L train to Bedford). This is part of Casey Block’s “This is Pop?” series