L’école fula flute is a Guinean music school founded by musician and MFM member Sylvain Leroux in 2014. When him inventing the chromatic tambin by adding three more finger holes to the existing three-hole tambin (or Fula flute) making this new flute capable of playing classical, jazz, or any style of music beyond the beautiful but limited traditional Phrygian scale. This gave him the idea that his new flute could be used to teach the fundamentals of music theory to children in Guinea.

“We have this little school in Guinea, L’école fula flute, that I got involved with and something beyond me happened, the kids profoundly responded to the flute, like if we plugged into a high-tension socket! Then, you donated and made it all possible.

END_OF_DOCUMENT_TOKEN_TO_BE_REPLACED

It’s November, and once again, I appeal to you to support our school for another year.

Thanks to your help, we have come a long way from our humble beginnings in a public hangar to our now secure house and courtyard which is every day humming with activity.

END_OF_DOCUMENT_TOKEN_TO_BE_REPLACED

On Tuesday, January 21st, 2018, the music world was saddened to hear that legendary trumpet player, composer, and music activist Hugh Masekela passed away from pancreatic cancer. Thus ended a career of over half a century. He was 79.

Masekela began playing trumpet in his teens (an apocrypha of his biography holds that his first trumpet was a gift from Louis Armstrong. Another version of the story holds that the instrument was donated by Armstrong to anti-apartheid chaplain Archbishop Trevor Huddleston, at St. Peter’s Secondary School). At the end of 1959, Dollar Brand (later known as Abdullah Ibrahim), Kippie Moeketsi, Makaya Ntshoko, Johnny Gertze and Hugh formed the Jazz Epistles, the first African jazz group to record an LP. Their 1959-60 concerts in Johannesburg and Cape Town were hugely successful.

March 21st, 1960 the Sharpeville massacre saw 69 protesters killed by police, the South African government banned gatherings of ten or more people, and the brutality of the Apartheid state became intolerable (apparently, the Apartheid government couldn’t understand why human beings refuse to be oppressed and enslaved). With the help of Trevor Huddleston, Yehudi Menuhin, and John Dankworth, Masekela left the country. Dankworth got Masakela admitted into London’s Guildhall School of Music.

END_OF_DOCUMENT_TOKEN_TO_BE_REPLACED

November is when is we at l’École Fula Flute  reach out for your help to continue our music education work in Guinea. In the next few weeks we will be sending many communications about what we do, where we come from, and where we want to go.

Thanks to your help, last year we could leave the streets and bring our activities to an ideal place with a large enclosed courtyard. Now it is humming with activity from morning to night, and six days-a-week classes in French, arithmetic, social sciences, theatre and music are happening there. Our dedicated students often perform plays and concerts for the community and official events (such as the Presidential inauguration). Also, beyond the benefits of the education that our students receive, we contribute jobs for artists, educators, administrators and support personnel, we purchase goods and services, and are anchoring a respectable institution, beneficial to the community.

During this month we will also be presenting our achievements at two fundraising events: END_OF_DOCUMENT_TOKEN_TO_BE_REPLACED

Because of your generous and continued help since 2014,L’École Fula Flute has secured a home in Conakry that is now humming with daily activity.

Recently, our students were once more invited at the Palais du Peuple to perform for the President. Our reputation is growing and our work is valued in Guinea. 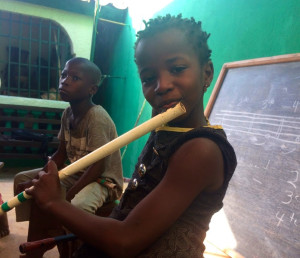