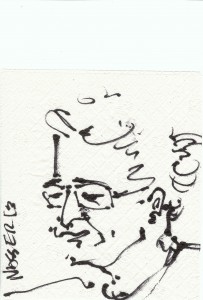 DooBeeDooBeeDoo NY is a cross-cultural on-line magazine, based on the view that music and community are indivisible, and that musicians, consumers and record companies are all part of one community.

The basic thrust of the editorial content is that social awareness can be fostered through music. DooBeeDooBeeDoo NY will also be a forum for other aspects of culture: film, literature, dance, exhibition, history, music events, social and political issues.

In 2004 Sohrab Saadat Ladjevardi realized an ongoing ambition to publish his own print magazine, DooBeeDooBeeDoo, devoted mainly to traditional and World music. The magazine was widely available for free in cafes, book stores, cinemas, fashion and record retailers, and music venues in Tokyo, Japan. Saadat published the magazine through his own record distribution and artist management company, POP BIZ Ltd., that also put on an annual music festival. Doo Bee Doo Bee Doo was the first magazine of its kind in Japan, and its content and clear philosophy received high praise. In the spring of 2008 Saadat closed his Tokyo company and decided to move to New York.

While settling down in New York, Saadat met many people and musicians from different countries and cultures. He felt there was a gap between coverage of interesting World-culture and traditional music in New York, and trendier youth culture in New York.

So in the summer of ’09, Saadat re-launched DooBeeDooBeeDoo NY (DBDBD NY) as an on-line magazine. In addition to listing events in New York City, it will also profile personalities and businesses of interest to the community, with links to related media and websites. The magazine is committed to supporting music and culture not affected by commercialism.

What kind of music will DBDBD NY cover exactly?

– all kinds of folklore and traditional music played today, with an emphasis on music with acoustic instruments, natural sounds and natural voice.

But due to the development of music technology we can’t ignore the impact of synthetic and electric instruments, and sounds – electronic music, rock-influenced music, sampling-based music such as hip hop, soundtrack music etc. Insofar as these music styles are “human”, inspiring, passionate and creative and not just hyped and commercial music, they would be covered by the magazine.

Every piece should connect the subject to music in some way.

All articles should be short – not more than a page. DBDBD NY reserves the right to edit articles for length, content and clarity.

A story that needs more elaboration can be broken down into a series of articles for two or more issues. It is also important that articles be enhanced with photos and graphics. Links to other informative websites, such as Wikipedia, MySpace, and YouTube should be provided.